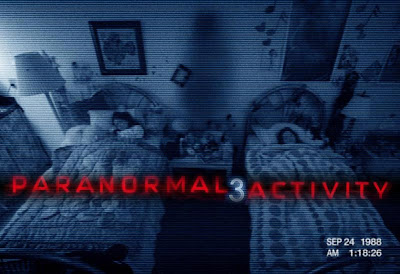 I went to the Cinema Tuesday night, finally got to see the Paranormal 3.  I had heard tales that it was the best yet.  With now three films in the series should it still be called Paranormal Activity, or just Normal Activity?

After some brief clips from the stories of Paranormal Activity 1 and 2 discussing family videotapes the aforementioned videotapes play.  They were all taken in the late 1980's when the two sisters Katie and Kristi are little girls.  Their step Dad Dennis is a wedding videographer and so likes to film his family lots.  When creepy goings on such as strange noises, and images are seen he decides to set up video camera around the house to catch anything supernatural happening.  He finds it all quite exciting and seems to have little regard at first for all the damn creepy stuff going on.  As the nights pass more and more scary things start happening and Dennis begins to realise that it isn't fun and that him and his family are in mortal danger from a supernatural entity. 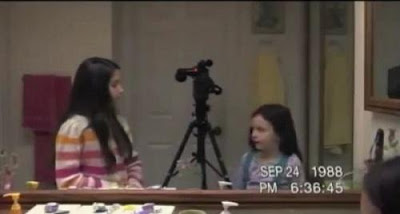 A sequel too far perhaps?  I think it is because I have seen so many 'found footage' films now but there really were no surprises in this latest entry.  People being dragged away by unseen forces were terrifying in Paranormal Activity 1 and 2 but here they have just lost all their fear through familiarity.  Sudden crazy eruptions of furniture made me leap to the roof in Paranormal Activity 2, but again here they have lost their impact.  I will never forget the kitchen scene in 2 when all the cupboard doors suddenly slammed but the same kind of effect is played far too many times here.  Again with the door slammings, jump scares, and time lapse footage showing a figure standing in one spot for hours; all have been done to death in other films and just feel boring here.

The third film being a prequel is a nice touch, and being set in 1988 leads to some nice looking set work, and clothes.  The plot though is just not very good, and the characters not too interesting.  Dennis the main lead is likable, even if he seems to not care too much how the spooky goings on are going to affect his step kids.  He seems too caught up in the events to appreciate just how messed up it is making his children.  His wife Julie is not in the film a great deal, mainly as the activity is kept hidden from her for most the film.  The other main characters are Katie and Kristi.  Kristi has an imaginary friend called Toby who turns more and more sinister as the film progresses going from an amusing interlude to a thing of terror.  Minor characters such as a babysitter and Dennis's apprentice Randy bring humour to the film but they too get caught up in the fear. 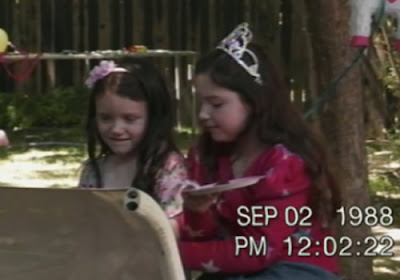 My main fault with the plot is that it is just silly, things make no sense such as why the videotapes were kept in the first place when they show such incriminating evidence, and I know the kids are supposed to have no memory of all that takes place but surely they would remember something?

The film is scary, I will grant it that, but so much opportunity is missed, I kept imagining horrifying things and instead got muted things instead.  The moving camera in the kitchen/front room was under used, and should have been far more scary, the special effects are too clinical.  The last third of the film really ramps up the horror and makes the film finally near nail bitingly terrifying but it is too little too late, though it did bring to mind 'The Last Exorcism'.

So all in all not a fantastic film, not bad, but so very average when it should have been scary as Hell.