This film was so different to my expectations, I thought I was in for a Hostel style teen horror, instead what I saw was a much more intelligent psychological terror.  I have lost my mojo lately, so again not a very well written review, apologies for that.

Four strangers from the UK have won a competition from a popular social networking site; all2gethr.com (a spoof of Facebook).  Their prize is an all expenses paid trip to New York.  The four; single mother Jo, geeky Max, Gwen, and slimy Dave are at first over joyed to see the luxury they are getting; limos, champagne, and a private jet.  It is when they are on the jet that things start to go awry.  As part of the in flight entertainment they are given a quiz to do by a mysterious representative of the social networking site who appears via TV screens as a computer animated Alligator.  The quizzes are just that little bit too personal, revealing humiliating and nasty facts about the group.  Things get even more sinister when it is revealed that the punishment for refusing to take part is the death of a friend from their friends list.  Pitted against each other by the voice the group must somehow work together whilst all the time having the threat of a death of a loved one hanging over them by the cruel sadistic Alligator.

Panic Button is a real psychological horror.  It reminded me quite heavily of the under rated My Little Eye.  There is a terror through out that is helped along by the claustrophobic jet, with the majority of the film taking place in the cabin of the jet.  The Internet is such a big part of everyones lives, Panic Button is scary in that it all rings true, the amount of personal information the majority of us happily put onto these faceless networking sites would give anyone ammunition to use against us.

The four main characters are all really well played, all British actors, they play their roles perfectly, and realistically, with lives on the line just how far would you go to protect your loved ones?  The reactions as they slowly realise the situation they are in is really well played, believability is a key factor in what makes this film so genuinely creepy.  Alligator starts off as a jovial character, his slow descent into cruel Saw style tormentor is quite subtle, Joshua Richards is ace as the voice.  My favourite character was Michael Jobson as Dave who plays his stereotype very well bringing a real vulnerability to the role. 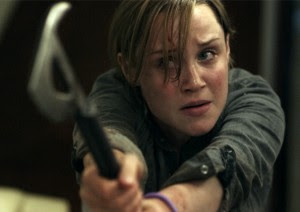 The tone is quite bleak throughout, a ever present sense of dread helping this.  The plot keeps you guessing throughout, though the twists are not too amazing but still keep your eyes glued to the screen.  The film looks wonderful, with great direction, and despite a minimal use of violence the fear holds out.  It also plays in near real time, a really neat feature that I always love in films.

This is a real product of our time, sites like Twitter and Facebook taking our information, while the Internet encourages bad behaviour due to the anonymity that using it gives us.  It certainly made me think twice about  the Internet.  Now I'm off to delete my Facebook account; you know, just to be on the safe side!

Panic Button is released on DVD and Blu-Ray on 7th November 2011.  A surprisingly effective thriller!