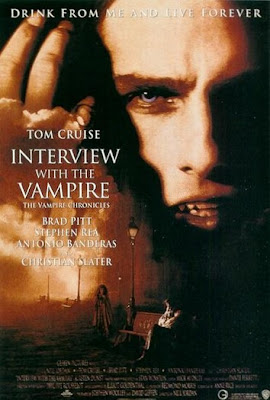 For reasons unknown I always thought Interview with a Vampire was a chick flick, so I never watched it.  I recently was convinced to watch it by my girlfriend, and I am glad I did! In general I dislike Vampire films, there have been a few good ones such as Lost Boys, Near Dark, and Fright Night but the more traditional ones usually leave me unimpressed.

The film starts in modern day San Francisco with reporter Daniel Molloy (Christian Slater) interviewing a strange man; Louis de Pointe du Lac (Brad Pitt) who claims to be a vampire.  The rest of the film follows the story Louis tells of how he came to be a vampire, and what it is like to be one.  The majority of Interview with the Vampire takes place in the 18th and 19th Century.  Louis depressed with life after the death of his wife and daughter meets a vampire called Lestat (Tom Cruise) who turns Louis.  Together they prey on humans though Louis refuses to take a human life, wanting to retain some of his humanity that Lestat seems to have lost.  A young girl Claudia (Kirsten Dunst) whose Mother has died of the plague is turned and becomes like a Daughter to Louis, though he is haunted by the fact that he has stolen a life away from this being who will be stuck for eternity as a little girl.  From the moment he became a vampire up to the present day Louis recounts his harrowed, doomed life, less as a story of interest, more as a warning to others. 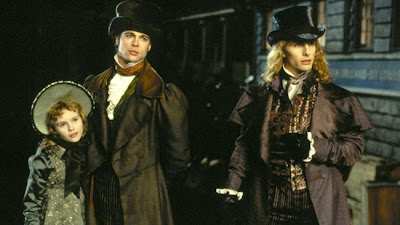 Interview with the Vampire is nearly two hours long and is neatly segmented into two different feeling parts.  The first part has Louis relationship with the near psychotic Lestat.  Lestat loves being a vampire and sees humans as weak prey.  Good living and plenty of victims are enough for him.  Louis on the other hand only become a vampire as he was sick of life.  As a vampire he is forever scared of losing his last shred of humanity, his conscience makes his new life one of misery and regret. Cruise plays the role of Lestat fantastically bringing real life to the role, his scenes are quite memorable.  Pitt is a far more brooding character, brought to mind the way Angel acted in the Buffy series.

After an epic finale to part 1 the setting moves across the seas to Paris. Here the film takes on more of a revenge feel as Louis encounters a bizarre theatre troupe comprised of sadistic vampires led by creepy joker Santiago (Stephen Rea) (his first scene in which Louis encounters him is the most surreal scene in the whole film with Santiago doing a bizarre silent routine that involves him dancing on the roof of a tunnel).  The troupe in turn follow master vampire Armand (Antonio Banderas) who is willing to teach Louis the secrets of living as a vampire, but at a high cost. 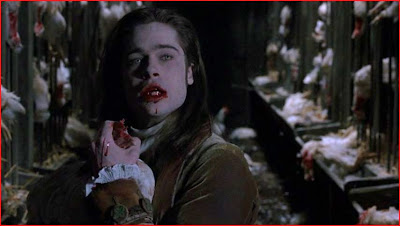 This film is epic, as one spanning 200 years should be. There is quite a lot of violence, of course mostly revolving around drinking victims blood.  The blood looks awesome, really thick and red.  A few dramatic fight scenes also occur with body parts flying left right and centre as Louis wrecks bloody revenge. In the film vampires can be killed by direct sunlight, and have to sleep in coffins, but they can survive stakes to the heart, fire, and crosses.  They have super human strength and agility as well as the ability to fly (well hover, which does look kinda silly).  The effects for the vampires are subtle but really work.  Veins show more, and the eyes are different, and of course they have fangs but there is not say the violent change the vampires in Fright Night display.

At its heart it is a dark tale film with plenty of horror elements.  Sometimes it descends into high action, other times introspective musings on the meaning of life.  Louis is not that great a character, he easily gets overshadowed by the more eccentric and exciting characters such as Lestat.  It is hard to feel sympathetic for the character of Louis who truth be told is a bit of a whiny loser.  The films ending it has to be said is really quite cool. There is a homoerotic feeling to the relationships between the vampires so if for some reason you wish to see Pitt and Banderas nearly kissing then this is your ticket. 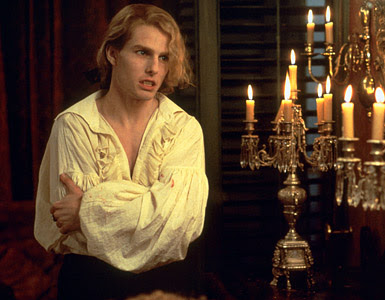 I totally realise I have discussed story and not much else so onto other things for the wrap up.  The locations look great, the film is shot well, and it never looses its steam right up till the end. The later day segments reflect the strangeness it must feel for Louis to outlive time periods.  Lots of blood, and for a vampire film it was cool.  I am not the biggest fan of vampire films but this while quite traditional in places provided a welcome respite from the trash of Underworld, Twilight and its ilk.

This is one of my favorite vampire films. The book is incredible. I usually don't go for fiction, but I highly recommend anything by Anne Rice.

I still don't understand how I got this film confused with The Bodyguard! I never really like Vampire films but this one was soooo good