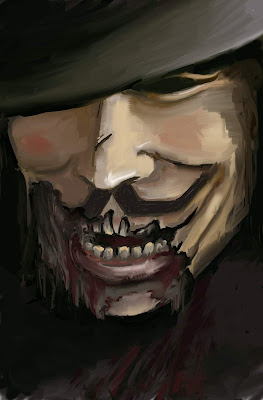 It is very near the end of the month and I have suddenly realised I have not done a general update yet.  As of late my updates have plunged downhill, this is due to having a job now so not much free time to read, watch or play stuff.  Still I must do more than just the one update a week.

I am still working my way through the Hellraiser collection, quite delayed seeing as I planned to have watched them all by Halloween.  I have a few zombie films I am looking forward to seeing; Pontypool, Seige of the Dead, Undead or Alive, as well as Season 1 of The Walking Dead.  I currently don't have my Cinema pass so am missing out on any new releases unfortunately.

On the book front I have Danek S. Kaus's Swords of the Dead to read as well as a billion Stephen King, Jamers Herbert and Dean Koontz novels.  Meanwhile at games I am playing through Deus Ex: Human Revolution as well as Demons Souls and Sam and Max: Night of the Raving Dead.

As you can see I have plenty to be going on with, I just need to pull my finger out and update more often! On a side note Blogger is god awful to use as it frequently breaks but regardless I am going to set up a pointer for therottingzombie.co.uk to point here as the site is more established.
Posted by Daniel Simmonds at 07:05