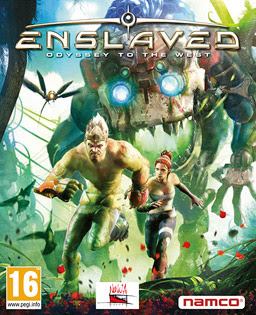 Enslaved is a post apocalyptic adventure game set in America.  Rather than the usual dreary browns and greys of wasteland America you get lush visuals full of greenery and sunshine.  Unfortunately the game did not sell well at all which is a real waste (land).

Enslaved is based on Journey to the West (one of the four great classical novels of China) It starts with Monkey (the character you play as) a prisoner on a slave ship.  Another prisoner; Trip has escaped her cage and in doing so accidentally brought about the destruction of the slave ship, freeing Monkey in the process.  After a mad dash through the disintegrating ship (as it flies over a ruined New York) he manages to get to an escape pod which crash lands.  Monkey awakes to find he has been fitted with a slave collar, the female escapee Trip explains that she now controls him, he must help her make the long journey across the continent, if he refuses her commands the slave collar will kill him, if Trip dies then that will also kill Monkey. 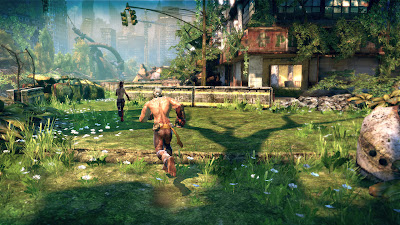 The game is a third person level based adventure that is a lot of fun to play as. For a change the post apocalyptic world is beautiful to look at, nature has reclaimed the world.  The first third of the game is the most beautiful taking place in a devastated New York over run with greenery taking in such locations as Broadway, Grand Central Station and the Brooklyn Bridge.  The City is a giant tomb with absolutely no life other than birds, it feels so empty and bleak. Unfortunately the locations after this rapidly go down hill, some nice mountain levels degrade into swamps and ugly places such as deserted robot factories full of dull colours. Apart from some bad texture pop in the game does look quite brilliant throughout.

It is never explicitly revealed but it is hinted at that the world ended after a huge war involving robots.  Now littered over the world are robots lying dormant, ready to be activated when their sensors detect human life.  Monkey fights these with his staff, and the combat is really powerful with brutal finishing moves that manage to look violent even though he is only dismantling robots.  Defeated enemies drop experience orbs, and the levels are littered with these orbs.  They can be used to upgrade Monkeys health and shield, as well as give him more moves to use in combat. 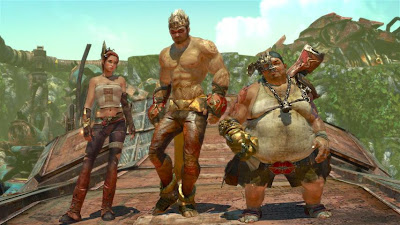 The best thing about this game is Andy Serkis, and the cut scenes in general are really well done.  Andy is the voice and motion capture for Monkey. The interaction between Monkey and Trip (voiced and motion captured by Lindsey Shaw) is really well done, starting off as highly suspicious of each other they come to really care for each other without the need for any soppy love scenes.  A third character; Pigsy (a little fat man whose armour resembles that of a Pig) joins the group which leads to lots of humour, and rivalry between him and Monkey, as well as a love triangle forming.  He lends the game a light hearted touch that helps to not make things too bleak.  This is not a particularly happy story, lots of bad things happen which isn't even sorted by the ending.  I was honestly nearly crying after seeing the ending, an amazing ending, really worth playing through the game just to see, to say any more would be to ruin it.

The game is quite easy, levels a combination of simple puzzles, platforming and robot bashing.  Bosses make appearances and are fun enough to fight, and Monkey gains the ability to fly around on a cloud for some sections of the game.  Hidden in levels are bizarre markers that reveal random photos of Andy Serkis doing different things (such as working in an office, or visiting the Pyramids with his children), these are cool to see. 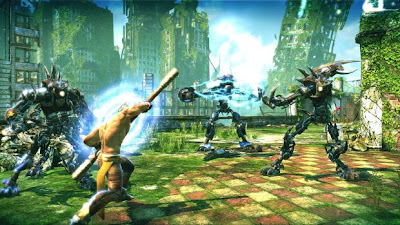 I love this game, it is a shame that not more people brought it (me included!).  It has a fantastic script, likable characters, and a truly special ending.