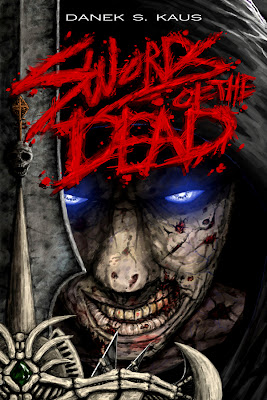 I have recently become aware of a unique sounding zombie book by the name of Swords of the Dead written by Danek S. Kaus. It is unique in that a small Town has not only come under attack by zombies, but Ninja zombies at that who despite being dead still utilise their martial arts to (un)deadly effect. I am pleased to be able to provide a sample of the book to give a taste of its humorous style:


So there you have it.  Zombie books are always welcome and brain eating Ninja zombies are right up my street.  A review of the whole Novella will be coming soon.  Swords of the Dead is available now on Kindle.
Posted by Daniel Simmonds at 10:01

I've never read a zombie book, where do you suggest I start?

I would suggest David Moody's Autumn series, the zombies are not your typical brain munchers but is an amazing tale