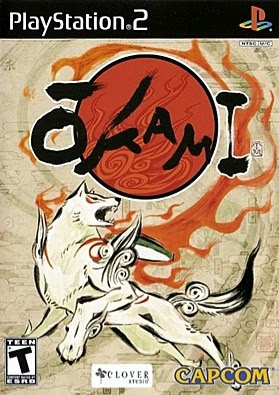 Okami got much acclaim when it was released.  It follows the Zelda template pretty much to the core with an over world map, dungeons, and gaining new abilities as you progress.  This game is far more story orientated though, something I have always felt the Zelda games do a poor job at.

Okami starts with a tale about a 8 headed snake Demon who for 100 years demanded sacrifices from a local village.  He was finally stopped when Nagi; a warrior from the village slayed the beast with the help of a mysterious white wolf which was killed during the battle.  100 years later the game starts.  The world has entered a new dark age with Demons turning up in vast numbers.  Worse, it seems the Demon slain previously (Orochi) has been reborn after the sword used to defeat it was stolen from it's shrine at the Orochi's previous home.  A wood sprite, and guardian of Kamiki village resurrects the white wolf who turns out is actually a God; the Sun Goddess Amaterasu (the character you play as). Ammy (joined by a small bug type man called Issun) are tasked to remove the curse covering the land by locating the 13 Celestial Brush Strokes and defeating the Demons plaguing the world. 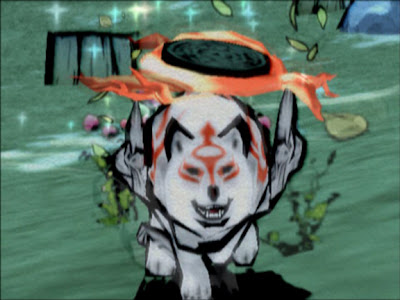 The game has a very unique visual style, resembling Japanese art, the game looks like a large water colour with stylised characters.  Apart from attacking physically you also use powers of a celestial brush.  With a button press this is initiated and sees you literally drawing on the screen with a brush.  As you progress new abilities are opened up.  By drawing a line through an enemy you slash them, a circle with a line coming out of it turns into a bomb, while linking lines from water, fire, lightning etc to an object or person makes that element affect them.  For instance drawing a line from a flaming torch to a block of ice will melt the ice.  These abilities come in handy for negotiating the many dungeons, such as using the wind ability to create platforms out of blowing wall scrolls, and using the slow time ability to slow down the movement of giant cogs.

The enemies take their influence from Japanese mythology, the demons wear masks with scary faces, have scrolls with Japanese text on them, and are very much imbued with Japanese mythology.  Several of the story points in the game are actually completely modelled off famous Japanese myths.  Boss fights appear quite frequently but some boss fights are repeated far far too often with fun fights turning into bouts of tedium after the first few times. 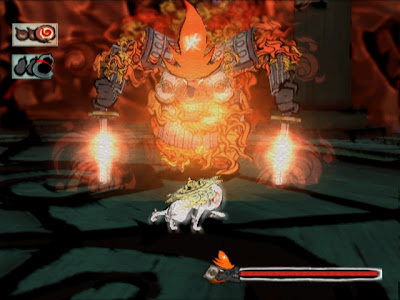 The games dungeons are many and varied ranging from the inside of a Sea Dragon to a pirate ship, giant windmill, and an Emperors garden (whilst shrunk).  Locations are also varied but all feel like they are in the same area the games set in, ranging from the bottom of the Ocean, to snowy mountains and lakes.

Now here is the thing; I wrote the review up to this point a few weeks back, even at the time I thought it was not my best piece of work, so for the sake of anyone who is reading this I will save your sanity by ending here.  To sum it up Okami is a unique looking Zelda clone that is fun, pretty, full of story and quite long.  Well worth playing!