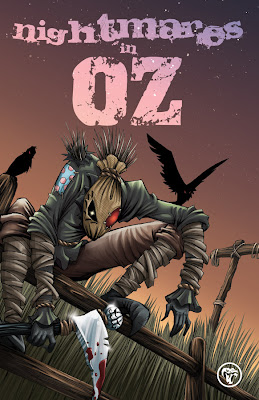 Nightmares in Oz is a horror comic due to be released by the ace Viper Comics on that scary day of October 31st 2011.  For your 0.99 Cents you get a digital download of 48 pages, so quite the beefy buy.  But what is Nightmares in Oz, and is it any good?

A group of teens have all chosen to go on a camping trip to some woods outside of a small American Town called Osmann Grove.  It just so happens that a few hundred years previously a young girl had been burnt to death on a scarecrow pole by the Townsfolk of the time who had been convinced the girl was a witch  Just before the girl died she placed a curse on all of the Townsfolk of Osmann Grove, as well as all their descendants.  Each generation evil comes to the Town to kill to remind the Townsfolk of the grave mistake they have made.  That time has coincided with the arrival of the teens.  Soon they find themselves pursued by the forces of evil across the woods, cornfields, and graves of Osmann Grove.

For the 48 pages you get a heck of a lot of action, and many many violent deaths.  It is only a few pages in that the murders start, and they really don't let up as the helpless teens are killed one by one by the evil forces.  The main killer is an animated scarecrow, he is armed with a scythe that he wields with lethal accuracy, for most the time you see the scarecrow his weapon is literally dripping blood.  Mute, lithe, and deadly his appearance is foretold by the sound of straw snick snickering along.  A horde of flying demons also appear, more a nuisance than a threat they still manage to kill quite a few of those unwary teens.  The seemingly good force in all this is the ghost of the burned girl.  She implores the teens to help her find a way to end the terror. 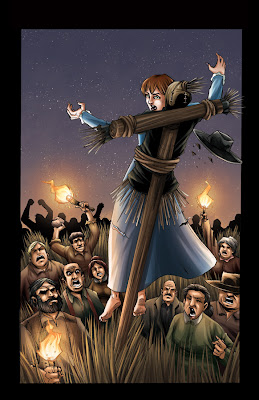 The plot is quite weak and not a lot is really explained, the comic is to be continued (twist ending) so maybe the next one would explain some of just what is going on.  There seems no real point to anything, the teens are there to party and include all the stereotypes you can think of; the mean jock, the bitchy girl, the cool guy, the wimpy kid etc.  Nightmares in Oz (cool title) really reminded me of a tacky teen slasher film with characters you don't care about, a poor excuse for plot, and lots of bloody horror.  Sometimes it is good to just relax with a piece of trash though, and I did find myself quite guiltily entertained by the goings on.  Makes me sound really shallow but the many deaths did it for me; people being decapitated, impaled, disemboweled, lovely stuff thick with plenty of the red stuff.

The art work is good with nearly realistic, but slightly over the top looking characters, the killer scarecrow comes across as suitably menacing.  My only gripe with how the comic is set out is that one page was in the wrong order causing a brief moment of confusion, I'm sure this will be remedied before it is released on the 31st.  The comic would make a great tacky movie, and as a comic it was a fun, exciting, albeit shallow read that featured plenty of entertaining violence, so left me satisfied.