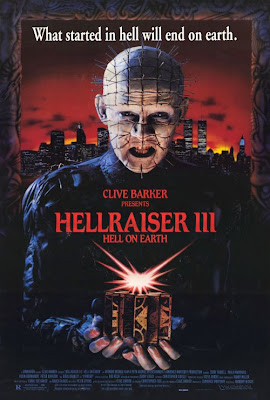 Pinhead is back once more, in an original story this time rather than a linked sequel.  This time the series really starts its descent into the tropes of horror sequels with a much higher body count, less serious, and more screen time for the bad guy.

A young reporter Joey (Terry Farrell) at a Hospital witnesses a man ripped to shreds by magical chains.  Thinking there may a story in the events she starts researching to find out what happened.  She learns about a nightclub called The Boiler Room where the incident took place, and that the man had been attacked after stealing a cube off of a statue the owner keeps there (the statue in question is the monolith that appeared at Hellraiser II's dodgy twist ending).  Meanwhile the club owner; arrogant J.P Monroe (Kevin Bernhardt) discovers that Pinhead is trapped in the statue,  he offers J.P power if he helps to release him.  It all boils down to the fact that Pinhead has been split into two and so there is the demon part who wishes to rule the Earth, and the human part who wants to stop the evil side. 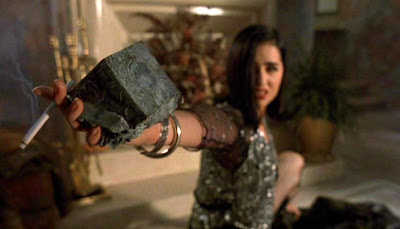 At first I was a little confused; in the previous films Pinhead was pretty much emotionless, an agent of Hell.  In this film he is a far more evil character; getting angry, taking great delight in hurting people, and being far more crafty in general.  With the appearance of good Pinhead this change makes far more sense.  No longer bound by the laws of Hell evil Pinhead cares nothing of his job (to take careless souls away for an eternity of torture) and instead seems to want to destroy the world, in fact he is now scared of the puzzle box as it has the means to banish him.  Pinhead is joined by a whole host of Cenobites he creates and together they unleash carnage on the City.  The scenes of them banded together are quite exciting, and certainly the action highlight of the film.

The special effects are quite cool this time around.  The Cenobites are varied including one with a video camera embedded in his face, one with a ever lit cigarette sticking out her throat, and one (that seems very dated now) that has Cd's stuck into his skin, and fights by ejecting Cd's from his chest and flinging them with deadly force at his victims.  There are a heck of a lot of kills, I would say the body count stretches into the hundreds!  Many of these are via Pinheads chains while some other more inventive ones include a glass of water that transforms into a floating watery Pinhead face before turning into an ice spear and impaling some poor girls throat, and the aftermath image of a man killed seemingly by having his mouth filled up with Pool balls.  Yes, it is a bit over the top, but Pinheads rampage is very enjoyable to watch as he hams about doing Christ like poses all over the place. 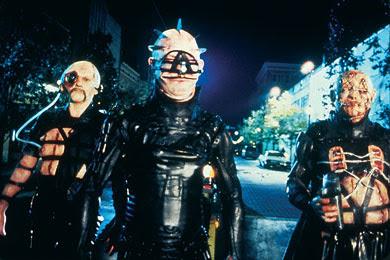 The film is set in the early 90's and is an echo of the time; much like the dress style in Hellraiser was a window to 80's fashion.  The plot this time around actually makes sense, though there are some tenuous plot links to advance story (the reporter Joey just happens to have recurring nightmares about her Dad dying in Vietnam, it just so happens that all war dreams are linked so good Pinhead is able to contact her via dreams, and just so happens Pinhead's human past is deeply trenched in warfare).  More back story on Pinhead is revealed here as well, following the last part of Elliot Spencer's life (his name before being reborn) leading up to his reasons for using the fated puzzle box.  Also there are enough nods to Hellraiser II to please series fans.

I really enjoyed this film, characters are well rounded, especially the tragic character of Terri (played brilliantly by Paula Marshall) who has one of the worst life's imaginable and is played as secretly ultra vulnerable.  It is dated definitely, but is fun, violent, and keeps a nice fun side to the series.