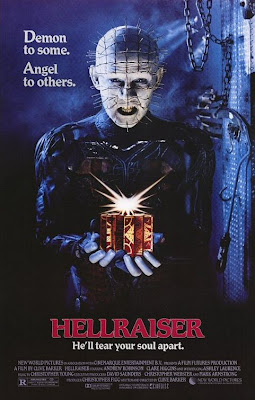 For this Halloween month of October I have set myself a horror challenge, my challenge is not too hard, it is to watch all 8 of the current Hellraiser films.  Turns out this is quite fitting as Hellraiser: Revelations; the ninth in the series is to be released on DVD on October 18th.  By all accounts Hellraiser 9 is utter rubbish, and is the first not to have Doug Bradley in it.

Hellraiser is based on the Clive Barker novella 'The Hellbound Heart' and apart from a few key differences is the same story.  A thrill seeking man (Frank) gets a hold of a puzzle box said to open a gateway to unimaginable pleasures, after opening it he is promptly destroyed by a group of demons called Cenobites.  Franks brother Larry moves into their childhood home with his unhappy wife Julia.  Accidentally blood is dripped onto the floor of the attic which just so happens to be where Frank opened the cursed box.  This resurrects Frank in a zombie form, he convinces Julia (who is obsessed with him) to get him victims so he can drink their blood and become fully human again.  Larry's daughter Kirsty (Ashley Laurence) discovers this and manages to get a hold of the puzzle box and unknowingly opens it.  This summons the Cenobites who want both Kirstys and Franks souls to take back to Hell. 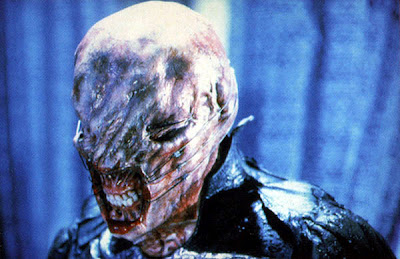 Yeah, so pretty much the whole plot was discussed there, but the film is a classic, everyone has seen it surely?  Unlike the rest of the films in the series this one is far more haunting, and does not focus on the Cenobites.  Most the film follows the relationship between Frank and Julia, flashbacks show the passion Julia has for Frank and explains why she is so willing to turn to murder to help him.  Relationships seem to be a big part of this film with that between Father and Daughter, Husband and Wife, and the muted love story between Kirsty and her friend Steve.

As a heroine Laurence plays the role well, looking both suitably scared, but determined to do what needs to be done.  She's not bad looking apart from the awful 80's fashion sense that haunts the film and her.  The true icon of the piece is of course the iconic Pinhead (played expertly by Doug Bradley).  The Cenobites lack of screen time only makes them more effective and creepy, Pinhead is the Cenobites voice, and what a great voice it is; 'We will tear your soul apart!' what an iconic line. 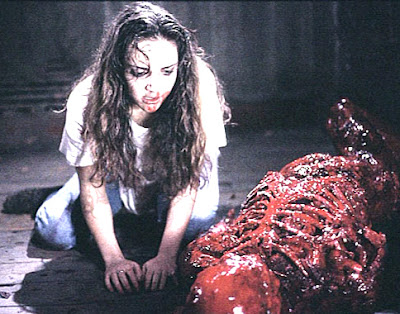 The films plot is good, but the film seems to fall apart a bit towards the end (quite literally actually) when Kirsty is chased around her Dad's house by monsters who don't really seem able to do anything apart from stand still and look creepy.  When I first saw this film I didn't like it too much, it was depressing, and the character of Larry (played by Andrew Robinson) reminded me a lot of WWE owner Vince McMahon.  However watching it for review I was surprised how into it I got, it really is a classic, it cannot be denied.  Sure the special effects can be a bit dodgy (the flesh ripping sequences look uber fake, and in one scene you can see a charging monster actually being pushed on a trolley by a crew member) but the Cenobites look amazing.  One of the best Hellraisers and essential viewing for any horror fan.

Posted by Daniel Simmonds at 01:30

I'm similar to you as I set out to watch all the Hellraiser films, however I find it challenging. I'm been watching them over the course of two months and I'm still not done. I have one (maybe two, still not sure about nine) and its so tedious.

Anyways great review, are you planning on watching the shorts as well?

I planned to watch 1 a day but it has been over half a week and only 1 done so maybe I will catch the curse as well. The films are enough for me at the mo.

Would have done the Halloween films instead as more fitting but somehow didn't occur to me until this was decided.

I'm probably one of the few people who have never seen it. I already sleep with my little night light on. I don't do so well with the horror genre. :)