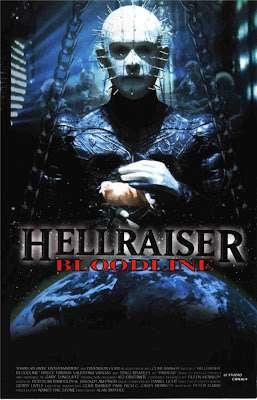 You can usually tell a horror franchise has lost the plot when it has an entry set in space, so I was kinda worried when the opening of the fourth Hellraiser film is set in the future; 2127 to be exact.  This film spans three different time lines, following the trails of the family who designed the original puzzle box.

A scientist on a space station has summoned Pinhead in order to destroy him, just before he is able to though a group of armed soldiers turn up and arrest the man (Dr Paul Merchant) due to him hijacking the station he is on (and also designed).  Whilst being interrogated Merchant begs to be able to kill the demon, thinking him mad his interrogator Rimmer decides to hear his story. Merchant reveals that his ancestor Phillip L'Merchant was a toymaker in the 18th Century who was tasked with creating a unique puzzle box for a rich client. The puzzle box is the original Lament Configuration that summons demons to Earth.  After this tale is done he then talks of another ancestor John Merchant; an architect who encounters Pinhead in the mid 90's (a few years after the events of Hellraiser III: Hell on Earth).  His family bloodline is cursed and each generation has worked to create a foil to counteract the evil they have unleashed on the world. 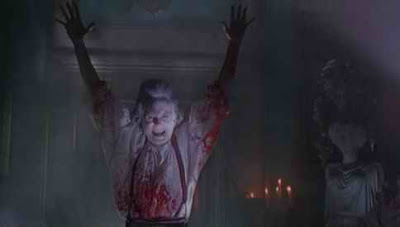 The film is quite cool in that it is set in three distinctly different time lines.  The original story was to have equal amounts of time dedicated to each timeline, but the script got butchered due to the desire to focus on Pinhead (who was not created until the 20th Century).  The 18th Century scenes are authentic in look but it is off putting that it is supposed to be set in Paris yet everyone speaks with American accents.  Originally time specific Cenobites garbed in powdered wigs and such were due to be featured, but these were cut from the script.  Instead we get a demon summoned; Angelique who is a Princess in Hell.

The 1990's section of the film is the most traditional section.  Following on from the twist ending of Hellraiser III we see the creator of the Lament Configuration building stalked by Angelique (still in human form) and Pinhead who she summons to help destroy Merchant.  Angelique believes seduction techniques can help her get what she wants (the destruction of the Merchant bloodline), while Pinhead who is beneath Angelique wants to get him by pain. 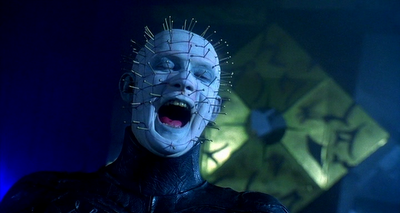 The last section set in the future bookends the film, it is kinda interesting in a tacky sci-fi type of way. Lots of  plasma rifles and long corridors.  For a film that is set in three distinct time periods it works surprisingly well, albeit in a cheap way.  Each Merchant is played by the same actor (Bruce Ramsey) his wide eyed innocence in his first two incarnations grates a little, he is too clean cut a character to be able to root for.  His more grizzled and worn out future incarnation is good, just a shame the sci-fi part is the smallest of the three.

Pinhead is joined by a Dog cenobite as well as two conjoined twins.  The violence unleashed is quite fun to be honest, people getting skinned alive, decapitated and ripped apart, at times the film feels like it was made for TV but was actually the last Hellraiser to be get a cinema release. 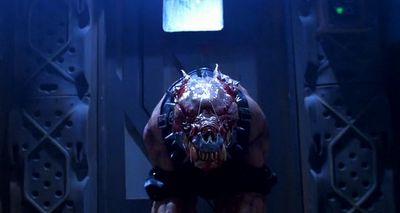 I have done it again and written this review on two different time periods so will read confusing and lost I no doubt fear.  Not a bad film, an interesting concept, and Doug Bradley is on fire as Pinhead here, one of his best performances since the original.  In a side note I have been told I talk too much of plot and don't critique films.  I may try and change the way my reviews are written.  Watch this space...(probably wont)