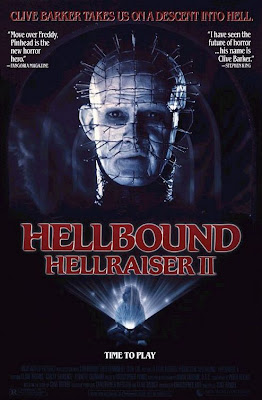 Before Hellraiser was even released scripts where being written for a Hellraiser II, and III.  The films were supposed to focus on the step-mum Julia as the main antagonist but after it was discovered how popular Pinhead was this was quickly changed.

Hellbound: Hellraiser II takes place very soon after the end of Hellraiser. Kirsty (again played by Ashley Laurence) is being kept at a mental institution due to her tales of battling demons.  Her Doctor; Philip Channard (played with sneering glee by Kenneth Cranham) is secretly obsessed with the occult, and so uses the information learnt from Kirsty to get his hands on a blood soaked mattress that Kirstys step-mum Julia died on in Hellraiser.  Using mental patients as sacrifices he brings Julia back from Hell, and then uses the aid of a mute puzzle solving patient (young actress Imogen Boorman) to solve a puzzle box (the Dr has three of the blasted things) so that the good Dr can see Hell himself.  Kirsty meanwhile has had a vision of her Dad in Hell and is determined to go there to rescue him, so the whole bunch all go on a field trip. 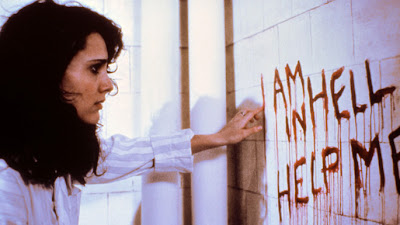 The plot in this film is utterly bonkers, I'm surprised the film doesn't collapse under the plot holes that at times threaten to drown everything.  For a start, and just a minor one; at the end of Hellraiser Kirsty's Dads house burnt and collapsed to the ground, yet here the house is not just intact but in perfect condition. For half the film things progress pretty well but it seems the second the characters go to Hell all semblance of a plot falls away to create a series of unrelated set pieces.  Dr Channard turns into a literal one liner spouting machine 'The Dr is in the house!', 'I'm closing your file!', 'I recommend...amputation!' ugh, awful.  Julia in the first film couldn't be evil all the time as she had to pretend to be a good wife, here she is given free reign to ham up her lines which the actress Claire Higgins does amazingly.

Hell is quite a boring place, it resembles a location from the kids film Labyrinth with loads of grey corridors, and M.C. Escher style walkways, where is all the pain and suffering that made Frank so scared of returning?  To return to plot again, apparently they wanted to get Andrew Robinson to reprise his role as Kirsty's Dad, but he refused leading to a lot of scenes being re-written which maybe accounts for the random nature of events. 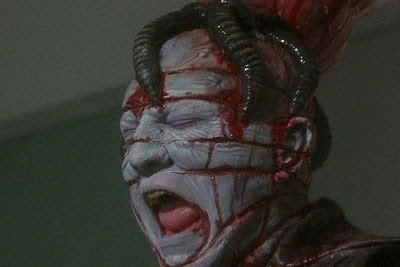 But what about the stars? What about the Cenobites?  They get caught up in sequel-itus, as they were so loved in the first film they are turned into good guys here, and manage to do even less then they did in Hellraiser in the process.  It being revealed that Pinhead was once human had a big impact on the following Hellraiser films I admit, and is well done (his ace transformation being the opening sequence of Hellbound) but Pinhead as a good guy? Not a great move.

I have to say the film is terrible, but it is also fun to watch, a Hell of a lot of fun to watch, I may score it low but it is worth seeing if you want a film where you can joyfully shout abuse at all the inconsistencies.  Don't get me wrong, this is certainly not a boring film, just a slap in the face to the straight nature of Hellraiser.

I'm happy to see that I'm not alone as a Hellraiser fan that didn"t like Hellbound: Hellraiser 2.

Actually, Kirsty Cotton never told anyone about her account on battling demons before suddenly ending up in Dr. Channard's Institute without explanation. It's a plot hole so big that Kirsty even questions how she got there.

Also, Kirsty's father not appearing in Hellbound was one plot hole less to worry about. In the 1st Hellraiser movie he was killed by
Frank Cotton instead of the cenobites, so there's no way he could have been dragged to Hell.

I agree with you on Hellbound: Hellraiser 2. it wasn't so much a story as it was a list of partially completed ideas that wasn't consistent. What happened was that Hellbound was greatly rushed during it's development (filming started while the 1st movie was still early within post production).

What also gets to me is how did Hellbound gain so much appreciation as being "the best of the sequels" (with quite an amount of fans even saying "the best of the series"). After all it wasn't well received at the time of it's release, so how did that happened is something I can never understand.

Those were some real interesting points I hadn't even thought about those.