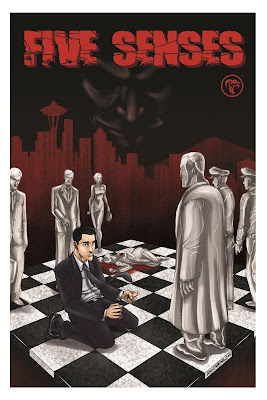 Five Senses is a new digital comic from Viper Comics. I was not sure what to expect really, I haven't read any decent horror comics for ages (hence the sparse coverage of horror comics on this site), but luckily Five Senses #0 was a great read and a perfect introduction to the series.  The comic can be found on the digital comic sites iVerse, Graphicly and Comixology.

Rather than give my own plot synopsis I will use the one the comic provides:

'Chad Bowman was on the verge of having it all.  But when he fails to come forward as a witness to a brutal murder, his life changes overnight.  Soon, Chad discovers someone or something is after him.  Now, Chad must stay alive long enough to prove he isn't the real killer and stop the mysterious entity from stripping him of his FIVE SENSES.'

The main character of the piece is not very likable.  Chad Bowman is an arrogant and selfish womaniser.  After he witnesses the murder of a young woman he lies to the Police in order to get to an important business meeting.  It will be interesting to see if he is being hounded by evil due to his having witnessed the murder, or if it is due to his self centred attitude that is causing karma to catch up with him.  Either way, as a cautionary tale it works well.

It seems throughout the series Bowman is going to be deprived of his 5 senses (hence the title), I don't know how this is going to impact on the story but will be interesting to see.  There was a real vibe of the videogame Heavy Rain with someone trying to prove their innocence whilst being hunted by the authorities, whilst the creepy dolls Bowman keeps getting 'gifted' reminded me a lot of the Saw franchise.

The art work fits the tone of the story well, Justin Wayne's character art verging on the realistic, giving believability to the world, as well as a slightly sinister edge.  All in all this was an ace first issue that has left me wanting to know what happens next.  I must also urge you to watch the fantastic fake trailer put together to spread the word about the series, it can be found at http://www.iamsenseless.com/.