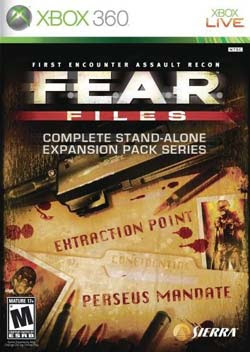 F.E.A.R Files comprises two expansion packs released for the original F.E.A.R; Extraction Point, and Perseus Mandate.  I assume if you are wanting to play this then you have played F.E.A.R as the plot will be utterly incomprehensible if you are jumping in a virgin.

Extraction Point continues directly after the ending of F.E.A.R with you continuing to play as F.E.A.R operative 'Point Man'.  Alma believed destroyed is instead still going.  She sabotages your helicopter causing it to crash.  Together with your two squad mates you need to make it across City to a Hospital where you will be extracted (hence the title Extraction Point).  The City has felt the effects of the explosion that destroyed The Vault (at the end of F.E.A.R) so there is ruination everywhere.  Soon after starting Paxton Fetell (the main villain of F.E.A.R) mysteriously comes back to life. 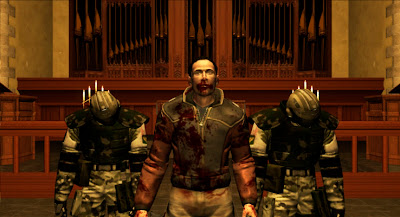 Extraction Point takes place over 6 Intervals (Levels) and takes around three to four hours to blast through.  Many of the locations you travel through have the usual F.E.A.R curse of being boring run of the mill places.  You get sewers, warehouses, a subway station, and a Hospital amongst over places.  Hardly the most exciting locations, but that's what F.E.A.R does well creating realistic locations rather than exciting gamey ones.

Enemies mostly comprise of the soldiers from F.E.A.R, new classes of soldiers appear such as one who has a giant metal shield and fires a mini gun, while some new weapon types appear such as a laser gun.  Invisible red eyed children also are in abundance, more annoying than scary they run up to you and hit you before running away again. 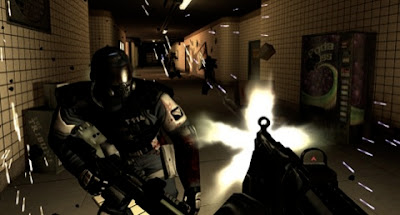 Extraction Point really is more of the same and offers nothing new, it also features quite a muted ending.  It is fun to play though despite its bland locations.

Perseus Mandate takes place during and after the events of F.E.A.R, roughly half and half.  In this add on you play as the originally named Sergeant who is a member of a 2nd .F.E.A.R squad dispatched to the City.  You are tasked with finding out the motives of a shadowy Mercenary group known as the Nightcrawlers. 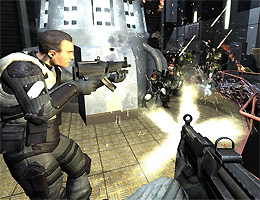 This add on is far more action heavy then Extraction Point, the plot takes far more of a back seat.  There is not really any paranormal stuff until around the halfway point mark, instead it is a series of battles against ATC Security forces, the Nightcrawlers, and Replica soldiers (who also battle amongst themselves).  New enemies are obviously the Nightcrawlers who behave much like the Replica army but are armed with a new type of machine gun.  The red eyed children, and floating ghosts are joined for this instalment by creatures who pull you into the ground.

Location wise there are offices, warehouses, sewers, and plazas with the final location resembling the Vault from F.E.A.R.  Locations are ok, but have lost some of the believability that has come before.  I actually enjoyed Extraction Point a lot more to be truthful, endless battles got to feel a bit stale, and this game even involves several boss fights. 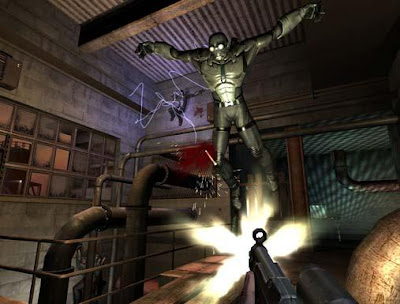 For a budget price F.E.A.R files is an amazing buy, you get a lot for your money, and a blood soaked fun FPS romp, just don't expect to be scared, F.E.A.R never really was a scary game, and even less so in this guise.