I had memories of F.E.A.R 2 not being that great, I recalled it being too Sci-fi and not enough horror based.  Replaying it for review (and in anticipation of someday playing the apparently average F.E.A.R 3) I discovered things are not quite so grim.

Including the two additional episodes (brought together in F.E.A.R Files) this is the fourth F.E.A.R game that features the damned explosion at the Vault.  The game begins slightly before the end of F.E.A.R and ends not that long afterwards (I would guess a month at most).  You play as Delta Force operator Michael Becket whose squad has been tasked with taking into custody a woman high up in Armacham (an evil corporation responsible for events), you soon find that you and your squad were all recruited. for your psychic abilities.  After the Vault explosion knocks you out you awake in a mysterious Hospital that is under attack by ATC clean up crews led by the vicious Colonel Vanek who want to destroy all evidence of Armacham's involvement in the events that have devastated the City.  With the help of a mysterious voice on your radio calling himself Snakefist you must evade the ATC clean up crews, as well as Replica soldiers 'awakened' by Alma (a psychotic ghost) and find a way to stop Alma's rampage which is literally ripping the City to shreds. 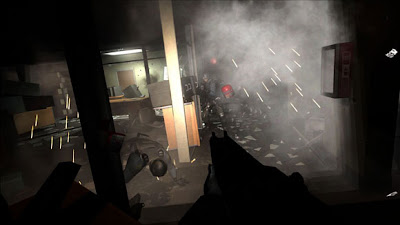 This game looks so much better than the other F.E.A.R games, the graphics are really quite good and feature lots of large chunky characters and enemies, everything seems so much larger than the average looking things of F.E.A.R.  Now the reason I did not rate F.E.A.R 2 too highly at first was due to locations.  For the first half of the game locations are realistic in feel, apartment buildings, streets, a Hospital, and a School.  What F.E.A.R does well is create locations that feel real, and Project Origin continues this feeling for most the game.  The last third turns into ridiculously large and convoluted secret bases that feel like videogame levels rather than real places which is a real shame as you leave the game only really remembering these large soul-less bases rather than buildings covered in details such as posters, graffiti and everyday objects like telephones, computers and books.  What is really cool is how totally destructible some areas are with windows, objects and walls all collapsing during hectic gunfights.

Enemies for the most part are quite similar to F.E.A.R.  You get an assortment of ATC and Replica soldiers who look different but act much the same apart from having better A.I to ensure they duck and hide more realistically.  The fighting is visceral and your weapons really feel like they pack a punch.  Blood sprays in large amounts, a particular highlight was that the Nail gun weapon now actually pins enemies to walls, nice attention to detail!  There are not really any new weapons, there is a cool Doom style BFG weapon that reduces any enemies the energy weapons ammo passes into skeletons.  More monster type enemies appear in the form of crawling mutants who are in plentiful numbers.  Ghostly enemies appear in the form of ghosts who are kinda annoying as they invert the screens colours when they attack, also there are ghosts who can reanimate dead bodies. 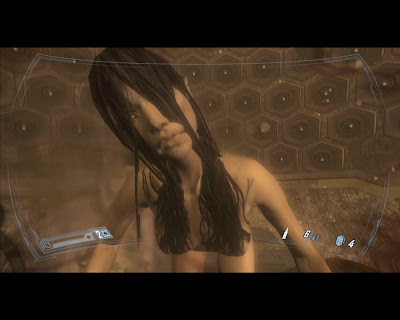 To break up the FPS action there are sections where you control a giant battle mech and lay waste to lots of foes, while some turret sections also feature, one near the end of the game has a bizarre rock number that starts playing, kinda cool but totally out of the blue for the games serious style.  The story is easy enough to follow, though again it assumes you have a knowledge of the F.E.A.R storyline.  Like the other F.E.A.R's this is not a scary game despite the many appearances of Alma.  In the original games she appeared mostly as a child in a red dress, but here she is portrayed as a grown up naked monster/ghost chick that reminded me of The Grudge or The Ring in the look of her.

Not a bad game, it looks and plays well, it just is let down by some very bland last levels where it could have done with something memorable.