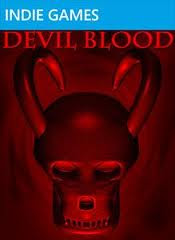 There is a never ending stream of horror themed videogames being vomited out of the Indie games section of the 360 Dashboard.  Sometimes I worry that this blog will just change into something dedicated to just reviewing a conveyor belt of terrible games, as the pile of Indie games I have to test is constantly growing.  On the plus side Devil Blood has no zombies in it, a nice refreshing change, also the game is an FPS which is also a nice change from the twin stick shooters that stuff the channel.

You play as a nameless man who is on the trail of a powerful Demon.  Apparently you are too weak to beat him and must collect Demon souls.  You do this by exploring what I assume is Hell, it is certainly very red.  Red corridors, very Doom like. 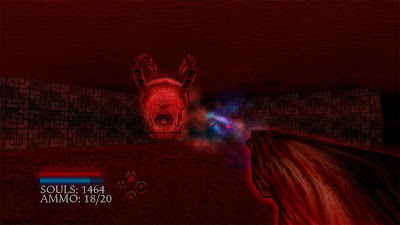 This game is frustrating, boring and far too red.  Enemies consist of red floating Demon heads which you must shoot with your red gun.  The problem is the enemies are ghost like and damage you by flying through you.  Their speed and the way they keep going back and forth through you until you die is ultra frustrating.  Your only punishment for death is to start at the beginning of the level again but this involves a tedious walk through long red corridors before again being assaulted by the hordes.  There is no option to invert the aiming, so I struggled with attacking anything, due to being somehow only able to play FPS games if aiming is inverted.

Your weapons are various red weapons that glow with a red sheen.  They fire some sort of red projectile that the demons don't seem to mind, it seemingly has no impact on them, occasionally one will just vanish from existence.  Going for this game is the sound.  No music but it has an atmospheric background noise of blowing wind, and wind chimes.  This game is a prime example of why there are not more FPS games on the Indie channel, maybe twin stick shooters really are the way to go.

The game is set in Hell, quite fitting when it is Hell to play.

Posted by Daniel Simmonds at 03:47