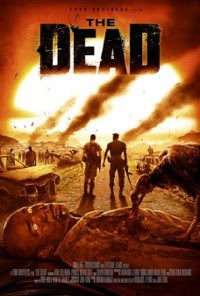 A friend of mine recommended I watch The Dead, he said it was the best zombie film he had seen in a long long time.  It sounded cool, the only problem was that it was not yet released on DVD.  That time has now come to pass and so last night I lay on my sofa and gave the disc a whirl.

The Dead takes place in Africa.  Zombie apocalypse has happened and American Lt Brian Murphy (Rob Freeman) is on the last plane out of the country when it crashes into the sea off the coast of West Africa.  He makes his way to shore as the only survivor (pretty much).  Even as he lays on the beach recovering zombies start appearing, drawn towards his living form.  From here on in it is a relentless journey as Murphy heads inland hoping to find a plane he can use to escape the doomed continent, ever under attack by the undead hordes.  Along the way he teams up with Sgt Daniel Dembele; an African soldier who has gone AWOL from the army in order to find his son.  Together on the road trip from Hell the two travel into the beautiful and haunted land. 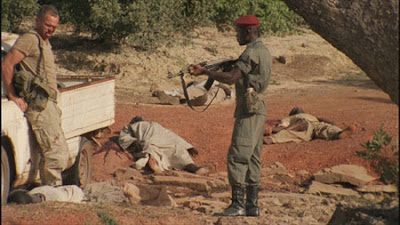 The Dead is a stunning film.  The natural vistas bring a sense of both isolation and insignificance to the pairs quest.  The film features no big towns, streets, or roads, instead we get open plains, rocky mountains, deserts, and corn fields with the ever present dust, and sweltering sun beating down.  The two can never afford to stop, it is never long before roving undead appear.  They walk like zombies of old; so slow, such lifelessness in their eyes.  These are not angry, hate filled creatures, but emotionless empty shells. I believe real life amputees where even used to play some of the zombies.  The closest we get to civilisation in the film are small villages made of clay huts, an abandoned rusting airfield.  The country was not much to begin with and now with zombie apocalypse nature is claiming back its land.

The film is played realistically and seriously and in a very straight way.  For the whole of the films 108 minute running time there is not one single joke or pun made by either of the main characters.  These are people on the edge, desperate to fulfil their goals.  Dialogue is very, very sparse, Murphy on his own does not say a word, so the first fifteen to twenty minutes are near silent, even teamed up with Dembele the pair hardly say much to each other, only speaking when necessary.  Even so a link is built between the two, and you come to really root for them. 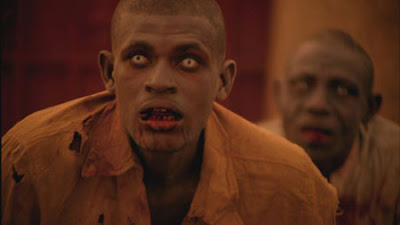 Plenty of violence occurs with lots of zombie chompings and head shots.  Limbs are cut off, heads decapitated, driven over and sliced up but the blood spilt is minimal.  The true fear comes from the tension that always seems ready to explode.  Many of the films set pieces take place in stressed situations.  Climbing a rocky outcrop to escape grabbing hands, changing a wheel on a truck while the zombies get closer and closer, even just the act of sleeping brings with it danger beyond imagination.

It is not perfect though, some of the dialogue feels a little forced in order to create tension, such as when they argue over whether to use their precious water supply to fix their overheated truck, or when after crashing the truck at night at one point they argue whether to turn on the headlights or not so they can see where they are. It seems whenever the pair stop, no matter how remote the location zombies start to appear, either really bad luck or just to make the film more exciting.  The acting for the most part is stellar.  Characters don't feel like they are acting, it all seems quite natural.  There is one part where a kid runs into the background to sit on his mothers lap that really felt ultra choreographed and forced, as if it had been practised hundreds of times; as stupid as it sounds that was officially the worst part of the film for me. 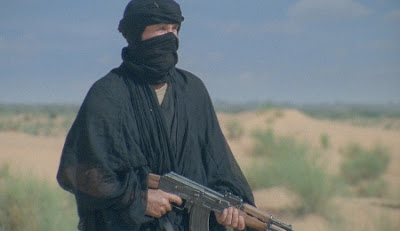 The Dead is a haunting, bleak and thoughtful film.  It feels at times like The Road with zombies.  A beautiful film.

Posted by Daniel Simmonds at 03:43

I've really got to see this.