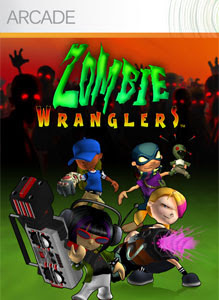 Long, long ago I downloaded Zombie Wranglers, back in the days when a mere mention of zombies in the title would warrant an immediate purchase.  I remember playing a few levels of it, hating it and abandoning it.  Now several years later I have returned, and returned in style completing the whole game in one play through.

Zombie Wranglers takes place in a cartoony world like that of a kids cartoon.  You play as one of 4 children who have somehow been employed by a Government agency as a zombie wrangler.  Your job is to infiltrate cordoned off zombie zones and defeat the zombies there by either killing them or wrangling them (sucking them up into some sort of big vacuum).  You seem to work for your Mum as at the end of each level you get a phone call on your mobile where she tells you where to go next. 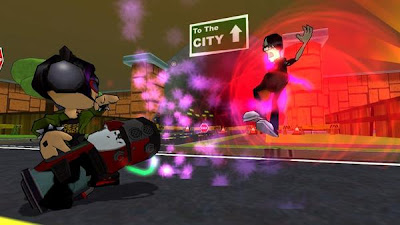 The games premise seems quite cruel to be frank, each stage is in a blocked off area (such as a street, car park, camp) with police and SWAT lazily watching from behind the barricades as you do your thing.  I don't know if in this nightmare world children are immune to zombie bites but it seems a clear breach of child laws (your character even says this himself at one point).  Obviously it is not really a nightmare vision of the world, more as I said before a Saturday morning cartoon style place where it is up to the 'cool' kids to sort out all the trouble.

Levels for the most part see you in an area with a check list of objectives to complete such as collecting special items and killing certain types of zombies.  Every now and again this will be interrupted by an area where your goal is just to survive until the time limit has ended, this is not as exciting as it sounds though and just involves running around in large circles for 5 minutes.  There is a range of zombies to battle; skater, tramp, armoured, puking, headless, and Knight zombies are just some of the types you will fight.  Some must have their armour knocked off before they can be dispatched while others can only be wrangled.  A few bosses litter the game, for the most part being rolling balls of zombies (like the critter balls in Critter 2) and giant Frankenstein Monster enemies. 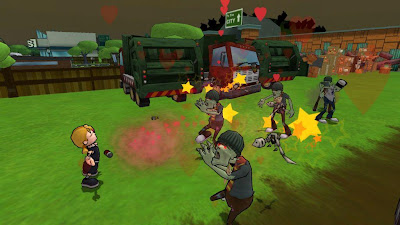 The game is very colourful and reminded me a lot of the art style of Costume Quest.  The dialogue is not great and you can tell the writers thought their dialogue was really hilarious which is a bit embarrassing.  Levels are named after films but with a bad zombie twist such as the rib tickling 'Zombies in Black' and 'Gone with the Zombies'.  The game is a few hours long and never really gets too boring despite its ease.  The achievements in this game are ultra annoying as they seem to be worth random numbers (such as 42 achievement points for completing the game).  A lot of the achievements involve collecting hidden items in the levels.  After all the objectives are achieved the zombies all vanish leaving you ample time to search out these items.

Geared more towards children this zombie game is bright, easy, and lacking violence (zombies just sort of fade away when killed, and your mouth activated weapon shoots some sort of purple goo) but it was entertaining enough to keep me occupied to its end.

Posted by Daniel Simmonds at 07:12