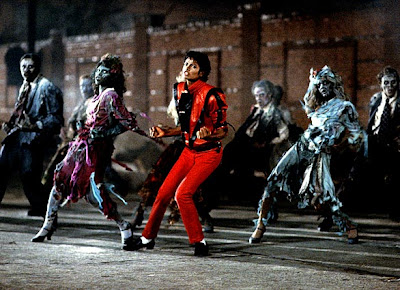 If my post yesterday about my zombie dream seemed like a cheap update then god knows what you are going to make of a 2nd zombie dream post.  Yet again last night in my dreams I dreamt of zombies.  Maybe it is a return to dreaming about those creatures every night?

I was not actually in my dream, instead the dream I had was a film I was watching, and which I knew I had watched before.  It really is not a real film though (as it's kinda lame!).  A group of friends where out in a Country Village by an old pub.  One of the friends summons a bunch of zombies including two twin zombies that kinda resemble Michael Jackson.  He tells his friends that he can control the zombies and starts some Thriller style dancing with them.  A Werewolf appears and starts chasing two girls from the group across some fields, back lit by a giant full moon.  The girls loose the Werewolf and stumble upon a graveyard where two grave robbers are creating life.  Lightning flashes in the sky and strikes a tombstone.  Out of a grave bursts the Bride of Frankenstein shouting "I Live!" one of the girls says "no you don't" and lops off the monsters head with a spade she's carrying.  That's all I recall about the dream, though the me watching the film in my dream knew that dispite its silliness the film got much more violent and frightening later on with the group of friends all being killed.

I had a cheese sandwich before bed, maybe that is why I had a weird dream?  I recognise elements from a lot of horror films in there, so maybe I had been thinking of films before I fell asleep.  A friend told me about a supposedly amazing zombie film called The Dead coming out on DVD and Blu-ray in October yesterday evening so that could account for the zombies.
Posted by Daniel Simmonds at 04:42