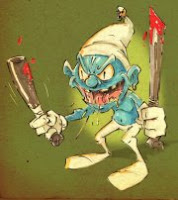 This is going to be quite a shot meaningless post but I felt it prudent to mention that I had one of my fabled zombie dreams last night.  Once upon a time I used to have at least one of these a week.  I can't actually recall much of this dream but will say what I do recall.

It was zombie Armageddon time and I was holed up in some large building with other survivors.  The building was under attack by thousands of zombies, all of which had bright blue Smurf coloured skin.  One of the survivors had the idea of cooking zombies as a means of not starving to death.  This seemed a great idea until someone said that surely zombies are rotten, so any meat off of them would be spoilt.

That's all I can remember but it was good to get a zombie dream again!
Posted by Daniel Simmonds at 06:28

Smurf colored skin? Maybe your dream had lighting problems like Savini and Romero did on Dawn of the Dead.

my friends mobile phone camera is bust so every picture taken on it comes out bright blue, i reckon thats where the blueness come from, but yeah, i forgot about the various strange coloured zombies in that film : )