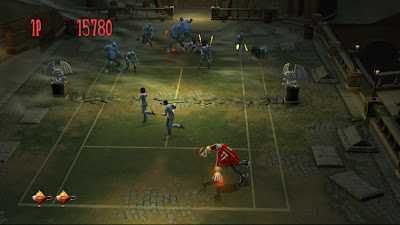 Playing Sega Superstar Tennis recently I was reminded that one of the courts is set in the grounds of the Mansion from Sega's House of the Dead game.

A lot of stages in the game set you challenges, such as collecting gold rings on Sonic's court.  The House of the Dead court has you fighting zombies via tennis balls.  Hitting the zombies cause them to fall over, should you get swamped then the challenge is over.  There are large, small and medium sized ones.  Either side of the court are stone gargoyles who spit tennis balls at you to use.  Some challenges see you needing to rescue scientists who run across the court, while others see the zombies armed with tennis rackets which they throw at you.

Quite a cool court in the game and features some select tracks from House of the Dead (a game I have sadly never got to play properly).
Posted by Daniel Simmonds at 04:29