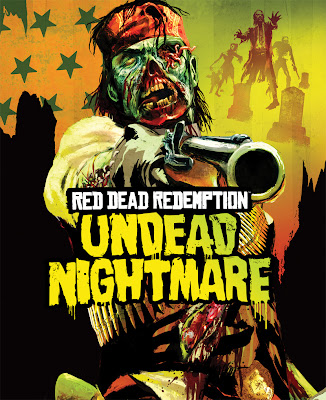 Red Dead Redemption is a third person sandbox Western set during the end of the Wild West in 1911 (think GTA with horses instead of cars).  You play as John Marston; a former criminal who has been tasked with hunting down his old gang in exchange for the safety of his wife and son.  The game is good, not as great as I had been led to believe.  Soon after the games release a downloadable mode called Undead Nightmare was released.  This keeps the setting of Red Dead Redemption but adds zombies, horror and all sorts of weird goings on.

It all starts with John Marston on his farm listening to his son tell him about the horror story he has been reading.  Soon after Marston heads to bed with his wife.  In the middle of the night a strange noise is heard, investigating Marston's wife is attacked by the farm help; an old man called Uncle who seems to be infected with a strange disease.  John kills Uncle but not before he has bitten John's wife who then bites their son.  Leaving his infected family tied up John heads off into the night to find a Doctor.  He soon finds that a plague is sweeping the land; zombie apocalypse has landed on the world of Red Dead Redemption. 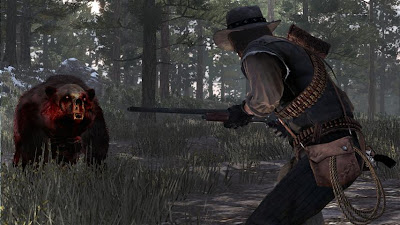 The game is really quite humorous but all the characters play it straight, acting much as they did in the proper game.  The amount of dialogue in this add on is truly special with even Marston himself having new incidental dialogue when fighting the undead such as "didn't I kill you the first time?" and "next time don't believe in reincarnation!".  A lot of the characters he meets in the main game feature here and it is quite fun to see who survived the apocalypse and who didn't.  An early encounter with Blackwood's British Doctor displays the type of black humour running through the game when he says to John (to paraphrase) "I'm just going off on my own down this dark alleyway, I'll be right back" while a casual Jew hating shopkeeper in the actual game here is a parody of himself blaming the Apocalypse on foreigners, Catholics, the British, Jews, the Chinese and many more minority's before being set upon and eaten.

The plot is quite good only with the realistic way (for the game world) everyone behaves.  It is a world of gun slingers and bandits so everyone is armed to the teeth and ready to fight.  My only complaint with the games story is its ending which is kinda abrupt and feels like a mission is missing.  The look of the game has been changed so that it looks permanently like it's dawn or dusk with plenty of thunderstorms.  All the wild birds have been replaced with bats and the games wildlife are now all zombie versions.  You will be set upon by zombie bears, zombie wolves, zombie jackals, and even get to hunt Sasquatches and the Chubacabra. 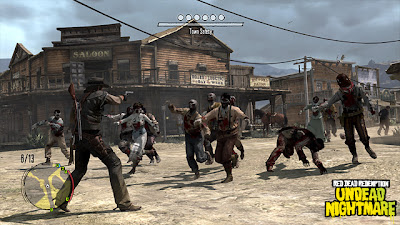 There are 4 main zombie types through out Undead Nightmare.  The basic undead will charge you on sight and are the most numerous, toxic zombies spit goo at you and explode when killed, crawling zombies are fast and hard to hit, while the fat zombies shoulder charge you.  All can only be killed by a shot to the head, damage to the body may knock them down but until their brain is destroyed they will keep on coming.

As well as the main missions and side missions there are also quite a few other tasks to do.  Challenges return from the main game with an undead twist such as killing a certain amount of undead wildlife by flaming torch, or finding and taming the 4 horses of the apocalypse.  The 4 horses all have unique powers (Pestilence is immortal, War sets zombies alight, Famine has infinite stamina, while Death kills all zombies that it touches).  The Towns of the west are all in trouble and need to be saved before you are able to rest at them.  This involves locating the survivors (usually on rooftops taking potshots at the horde) and working with them to drive out the undead menace.  Every now and again a Town you saved will come under attack, requiring rescue again but this does not happen too frequently. 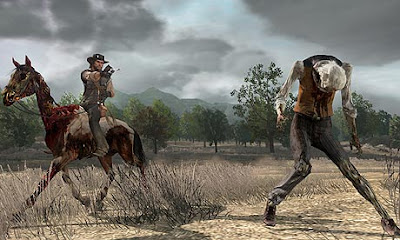 At around 15 hours long this is good value for money, I actually enjoyed this far more than the main game!  It feels like you are in a nightmare; an undead nightmare at that.

Posted by Daniel Simmonds at 09:25