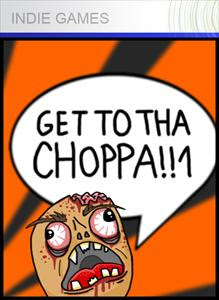 As the sequel to this game has recently come out (GET TO THA CHOPPA TWOOO!!2) I thought it was about time I played the original.  The title is of course taken from Predator from the infamous line Schwarzenegger shouts.  The game is in a similar style to Canabalt in that you control a perpetually running guy and must use basic commands to make him avoid the various obstacles in his path.

You play as a man in the middle of a zombie apocalypse.  You are running down a road chased by hundreds of thousands of running zombies.  Dotted on the road are land mines which you must jump over, stray zombies who must be shot and, flying in front of you is a helicopter which periodically fires missiles at the throng behind you (you have to slide under these). 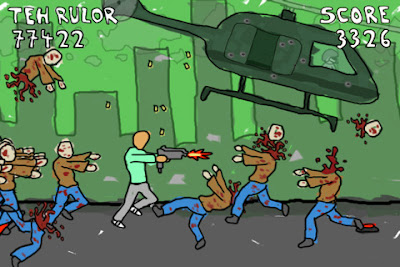 As far as I can tell it is actually impossible to complete this game, as time goes on everything gets faster and faster.  Around the 100,000 points mark the music fades away to be replaced with a heart beat but I never survived much past this.  The music is some sort of high paced trance that does its job but is quite forgettable.  There are 3 buttons you need to use, but you can hold down the fire button meaning all you really need to do is press A and down on the analogue stick.  Quite an addictive game and for 80 Microsoft points as cheap as can be.  The hand drawn art style won't appeal to some and the game could have done with more variety.
SCORE:

Posted by Daniel Simmonds at 09:11

I think the game's name might be the best part. I guess with an indie game like this, you have to find a way to make it stand out.

yeah the title is kinda cool, don't like the capital letters though