General Update for the Month of September 2011: Night of the living Bloggers 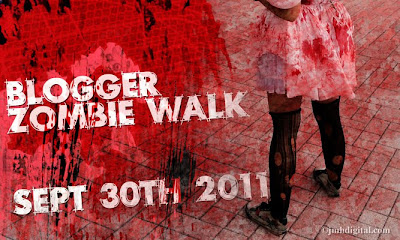 And so the seasons pass, I can't believe how quickly this year has gone.  So another general update from me; the Rotting Zombie.  First off the Blogger Zombie Walk 2011...

On 30th September it is the Blogger Zombie Walk of 2011.  Rather than a real life zombie walk this is a far more eye focused walk.  Starting off on one site you follow the links from site to site reading a variety of wildly different articles about zombies as you go.  I am pleased to say that I am going to be part of this, though don't know exactly what my post will be about.

The latest Zombie Times Newsletter is out, in it I learnt about a cool sounding zombie film in the making starring legend Craig Charles (who I once saw at Milton Keynes).  The film is called Zombie Carnage and is about a reality TV show in which contestants fight zombies, ruled over by a crazed Producer.  Sounds like a cross between the video game Manhunt and The Running Man.

Last Friday both Fright Night and Apollo 18 came out at the Cinema.  Fright Night is a remake of the 80's vampire flick of the same name. The original was a horror with comedy mixed in, this looks to try and be the same, though I must say I am not impressed with the trailer.  Apollo 18 seems to be another Blair Witch style film, with the unique twist of being set on the Moon during one of the (alleged) Moon landings.  Quite good for new horrors at the moment.

I am playing through Red Dead Redemption: Undead Nightmare which mixes the Wild West with zombie apocalypse.  Red Dead Redemption was an ok game but this new tale set in the game world is amazing.  Zombies, humour, horror, and even the 4 horses of the Apocalypse to capture.  Review coming soon!  Final Fantasy XIII is still going on, and still quite boring.  I cannot wait to finish the blasted thing.  A damn ton of X-Box 360 Zombie Indie video games are also lining up to be reviewed. 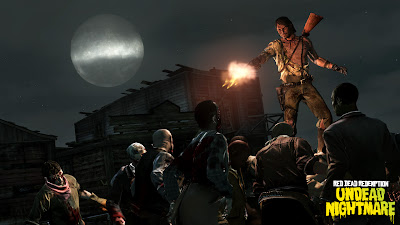 On the book front I am currently reading a compilation of Stephen King short stories titled 'Everything's Eventual'.  It is ok but a lot of the stories are not horror so a tad disappointing.  No doubt the latest issue of Shock Horror is out but the fine folks there always screw up my delivery so will have to chase that up.

Good time for horror, and don't forget the Blogger Zombie Walk on September 30th!
Posted by Daniel Simmonds at 14:27