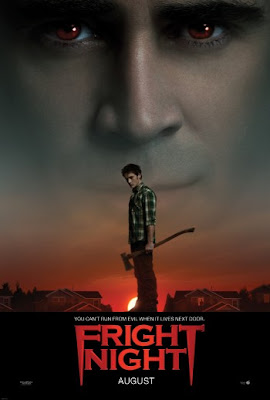 I caught the very last showing of Fright Night 3D today at the Cinema, I was not that bothered about seeing it due to three things.  Firstly the trailer for the film was awful, I don't know why but trailers for horrors all seem terrible lately and do more to put me off seeing the films than anything else.  Secondly the film is a remake of the eighties cult classic of the same name, many remakes are unfortunately not very good.  Thirdly the film has a 3D slapped on the end of the title, while I think horror makes the best use of 3D it still does tend to be used for cheap thrills.

Fright Night takes place in and around Las Vegas, mostly centered on a small suburb out in the desert.  High School student Charley Brewster (Anton Yelchin) is told by his ex best friend geeky Ed (Kick Ass's Christopher Mintz-Plasse) that his new next door neighbour Jerry (Colin Farrell) is actually a vampire who has been responsible for a number of disappearances in the area.  Charley dismisses this news as rubbish convinced his ex friend is just trying to get attention after he was ditched when Charley reinvented himself to get in with the cool crowd.  This changes when Ed goes missing and an encounter with Jerry convinces him that his old friend was right.  With no one to help Charley must find a way to defeat the centuries old vampire while protecting his mother Jane, and girlfriend Amy (28 Week's Laters Imogen Poots) from harm. 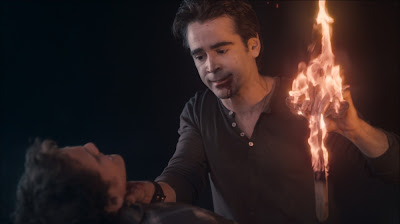 I have seen the original Fright Night, though a long time ago so my memory of it is quite hazy.  I recall a scene in a nightclub but that's about it, should re watch it some day.  Fright Night 3D is actually quite a cool film.  Films like this can be swamped with obnoxious 'cool' kids but thankfully the ones in this film are soon killed off.    I was worried that the film would be quite tame on the old ultra violence but luckily there is lots of blood and some fun action.  For the most part the blood flies into the audience (via the dubious magic of 3D) but it looks quite ace.

The film centres on the battle of wits between Charley and Jerry, their feud take place in a variety of locations including a fast paced highway chase that starts with a motorbike being hurled through the back window of the car Charley, his girlfriend and Mum are escaping in and from that point events ramp up.  Farrell is great as the vampire, coming across as more serial killer than monster with his wardrobe of disguises, and secret Hostel style torture rooms hidden in his house.  His transformation makes him look really odd and disquieting as the fangs that grow in his mouth give his whole head a strange creepy shape.  The usual tropes work on him such as holy water, sunlight, fire, stakes and by the end of the film all these methods have been used with good special effects on display.  A memorable scene midway through the film has Jerry jerking stop motion style around the ground with a signpost jammed through him, while a later amputation is painful to see but kinda funny. 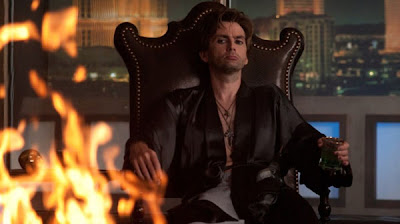 Yelchin as Charley is ok but it is the supporting cast that really help out.  Slightly comedic vampire hunter/Las Vegas performer Peter Vincent (Dr Who's David Tennant) definitely upstages him though his mannerisms and look reminded me heavily of Russell Brand.  The film at just over an hour and a half never gets stale and is pretty much one big action fest from the moment Jerry and Charley twig onto each other.  Thankfully no sex scenes or nudity and is all the better for it. Fright Night 3D is infused with humour which is actually not that bad, a few cultural references to Twilight but otherwise the jokes are universal.  Due to the humour the film is not actually scary, apart from a few jump scares, I believe this could have worked as a serious piece of horror, Farrell is certainly unsettling enough in his calm confidence but as a comedy horror it brings excitement, set pieces, good effects and a good use of 3D to really immerse you in the experience.