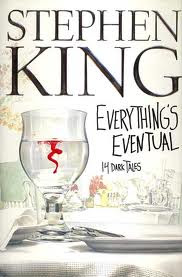 I have only recently started reading Stephen King so when I saw this collection of short stories of his in a charity shop I snapped it up.  Contained within are 14 stories of what I hoped would be horror, terror, chills and shocks.

Perhaps not having read many Stephen King stories I had misled myself a bit, because here there is a collection of tales, but not all of them are horror, in fact quite a chunk are not.  Starting off with 'Autopsy Room Four' we have the classic story of someone who is assumed dead but is merely trapped in his own body, unable to alert anyone to his status, not particularly interesting.  'The Man in the Black Suit' is the first real horror story of the book.  A young boy going fishing encounters a strange and horrifying man; the Devil in human form who gives chase; a panicked and chilling tale.

The next few tales are all non-horror with a story about a travelling salesman contemplating suicide in a remote motel room, a truly boring crime story about a member of a famous armed gang, and a real life horror story of an undercover reporter captured by a cruel dictatorship.  After this comes a short story set in Stephen King's fantasy world of the Dark Tower.  This was a good introduction to that world and has made me interested in reading more.

The book then returns to horror for much of the rest of the book, though a lot of the stories are all takes on well known stories.  'The Road Virus Heads North' is about an evil painting, title story 'Everything's Eventual' riffing on Scanners, and '1408' being a classic haunted house story that is by far the scariest of the stories here (I have the film of 1408 on my to watch pile so may soon see that).  Apart from a clever Groundhog Day style story ('That Feeling, You Can Only Say What It Is In French') that is it for great stories.  'Riding the Bullet' may feature a zombie but it is still a bit lacking on scares.  A notable exception, and perhaps the best story of the book is 'Lunch at the Gotham Cafe' which is truly insane and features an amazingly well described character (an off-kilter waiter).

Each of the 14 stories is either forwarded or concluded with King given an explanation for why or how he came up with the story, some of these are really interesting such as King saying the evil picture in his haunted picture story is actually owned by him in real life, and that his merely passing by a New York Cafe and seeing a waiter and an arguing couple led to the crazed Cafe tale being formed in his mind.

King is undeniably talented, it is a shame that I did not get what I expected though with many of the stories here being good, but just not creepy enough for my taste, nothing that left goose bumps with me.  Comparing him to H.P Lovecraft is unfair but that masters tales always left me with a feeling of utter dread, and tears in my eyes.

Posted by Daniel Simmonds at 05:27

The Night Shift is one of his better short story collections and would fulfill your appetite for horror. Quite a few of its stories have been turned into movies or miniseries. Its stories, Grey Matter and The Last Rung on The Ladder are chilling or affecting.

As for 1408, don't expect as much from the movie. The short story is much more scary and is just brief enough that it doesn't overstated its welcome. The same cannot be said of the film version.

Watched 1408 the other day, I agree the short story is so much better, it's actually scary for a start.