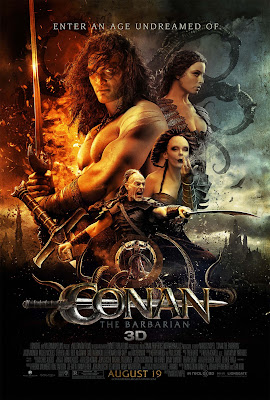 I heard the new Conan the Barbarian film was bad, both professional and social sources told me it was trash.  Seeing the trailer for the film I was totally convinced it would be awful and so went to see it expecting utter dross. What you need to remember is that this isn't a remake of the 1980's Arnie films but is in fact a totally new take on the classic Conan series of books.

The film takes place in the fantasy world of Robert E Howard's Hyborian Age; after the fall of Atlantis but before the rise of the known ancient civilisations. It is a world of swords, sorcery and violence where might is right and the weak are crushed. The film starts with Conan as a Cimmerian child. His village is attacked by the forces of Khalar Zym (Stephen Lang) who are seeking the remains of a magical mask that has the power to turn its wearer into a God. The village Chieftain; Conan's Father (Ron Perlman who coincidentally provided the voice of Conan in the video game a few years back) is murdered and the village razed to the ground. As the only survivor Conan swears revenge on the mysterious attackers. Years later and Conan now a fully grown man (Jason Momoa) is seeking out the group responsible for his clans destruction with the aid of a group of pirates.

In many ways Conan the Barbarian is very faithful to the tone of the books, Conan himself is perhaps a little too nice, and does not appear as dim and afraid of sorcery as he is in literature. The world of Conan is a sexist place with strong men dominating over the female half of the population. So here we get plenty of half naked women, lots of harlots and wenches but also some who are shown to be strong such as Zym's sorcerer daughter Marique (Rose McGowan) and main heroine Tamara (the beautiful Rachel Nichols). An odd plot choice does lead to Tamara needing to be rescued where she reverts to type being a screaming damsel in distress. Conan's world is a harsh violent place, this is reflected in the film which has plenty of violence and gore. Heads are decapitated, limbs chopped off, blood is spilt and one bad guy even gets his nose lopped off! Only a 15 rating but there is definitely plenty of violence and darkness (also it is slightly implied that Zym and his daughter share an incestuous relationship).

The plot of the film is highly predictable, nothing surprising happens but this tows in line with the books which are some of the most brain dead fantasy tales on offer. I am not knocking the books as they are highly entertaining but still both them and the film feature nothing but action from start to end. Momoa as Conan is an ok choice, sometimes he seems a little too clever to be the hulking barbarian required of him, while Lang as antagonist Zym is evil enough but he just never really feels as much of a threat as he is made out to be. From start to end though there is plenty of exciting fights include a few monster battles (such as clay men and sea monsters). The film looks gorgeous, the 3D is under stated and really doesn't bring much to proceedings though, but there are plenty of location shots.  At times this felt like a more violent Prince of Persia. 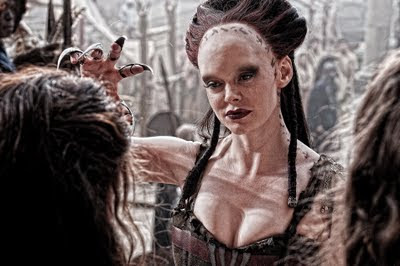 For a slice of fantasy action this certainly ticks all the boxes; nudity, violence and a dramatic soundtrack.  Leave your brain at home and there is plenty to enjoy, just don't expect Shakespeare.

Posted by Daniel Simmonds at 08:05