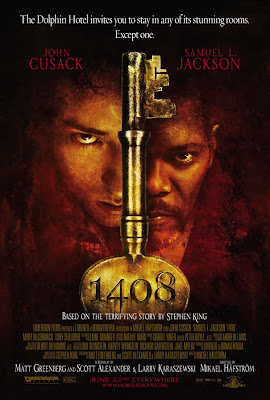 I recently read the short story 1408 by Stephen King.  By lucky coincidence I had a copy of 1408 on DVD on my to watch pile of films, it felt like the time to watch it. Starting off quite similar to the written tale the film then went off to follow its own path.

John Cusack stars as Mike Enslin a cynical writer of books about real haunted places.  In his mail he finds a mysterious postcard from The Dolphin Hotel of New York warning him from staying in room 1408.  Accepting the challenge he researches the room and discovers that since the Hotel opened in the 1920's over 30 people have committed suicide in room 1408.  Thinking it would make a good chapter for the end of his latest book he travels to the Dolphin where he encounters the Hotel owner Gerald Olin (Samuel L. Jackson) who is determined to deter Enslin from entering the room.  He informs the cynical writer that including natural deaths over 50 people have died in that room and that even one of his maids went insane and clawed her eyes out after briefly being trapped in the room while cleaning.  Enslin ignores the warnings, thinking that Olin is merely trying to build up the legend of the room.  Soon after entering he realises his mistake; something evil is in room 1408, something that is not going to let him leave. 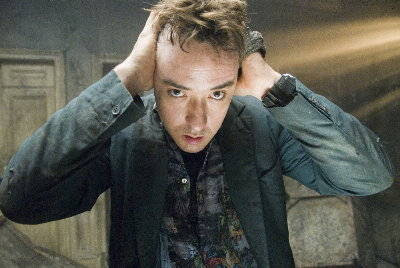 The film adds a lot of back story to the character of Enslin.  In the book he was a writer who had fallen on hard times and so was writing these low brow haunted house books as a means of making money.  In the film Enslin is revealed to be visiting these haunted places in the search for evidence of life after death but has become extremely disillusioned in his search.  Both the film and the book start off quite similar, up until the writer gets into the room the film is quite chilling.  The problem I had with the film is maybe due to me having read the story such a short time ago.  In the book Enslin lasts about 70 minutes in the room where he is reduced to nearly a gibbering wreck, the film Enslin does get terrified at first but this soon turns into frustration and anger and an acceptance that he may never escape.  The book has events ramping up into crazed terror but here there is lots of downtime where it is just Enslin and his thoughts.

The room goes through quite a few changes, it goes from hot to sub Artic temperatures, the room floods (via a painting of the sea) and even seems to leave reality for a bit. No matter what the writer does he cannot escape.  A desperate crawl along the outside window ledge leads to the realisation that no other windows now exist on the Hotel, while a crawl through the rooms ventilation shafts sees him looping back on himself as well as chased by a zombie of a previous guest of the room.  The chills sometimes work and sometimes don't.  One clever scene has him trying to contact a man in the building opposite his room before he realises he is that man moments before the figure is attacked from behind by a maniac with a hammer. 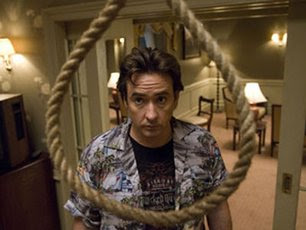 The room seems to be a conduit for Enslins memories with him seeing visions from his past such as a scene with him, his wife and his daughter played out on a TV screen, and glimpsing him arguing with his father through a vent.  Things get kinda ridiculous when he sees Olin; the Hotel manager lecturing him from inside the rooms fridge.  Cusack holds the film together well for its near 2 hour run time (I saw the Directors Cut) but at times it does seem the length is slightly overlong.  There is a quite clever false ending that caught me off guard, the actual ending is ok, but is actually different to the more upbeat ending shown for the Cinematic version.

Not a bad film but not that scary, still it is well made, well acted and just about stays its welcome.

Posted by Daniel Simmonds at 05:59