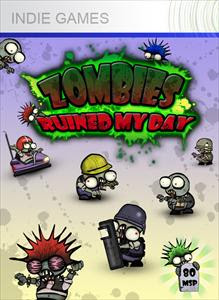 I haven't reviewed a X-Box Indie zombie game for a while now, but like the actual undead they just keep on coming and now I have quite a large bunch beating at my door.  Zombies Ruined My Day is a cartoony side on shooter that is a breath of fresh (I guess rotten) air in the never ending glut of overhead zombie shooters.

You play as a nerdy office worker who finally gets a date with the girl of his dreams.  The only problem is that zombie apocalypse happens the very same day.  Full of nerd rage you must defeat waves upon waves of zombies in a variety of locations. The game immediately sets itself apart by being side on.  A nice change that makes the game stand out.  Zombies Ruined My Day is a shooter that requires a surprising amount of strategy.  I went into shooter mode and while that worked for the first stage found myself repeatedly dying on the second until I realised I had to plan my attack.

You start off at first with a weak pistol with infinite ammo and an Uzi.  The Uzi has limited ammo which can be replenished by shooting the military zombies and collecting the power ups they drop.  Zombies arrive in waves and walk Lemming like; when they get to a wall they turn around and walk the opposite way eventually working there way down to your level.  It only takes one hit by a zombie and you too join their ranks (a nice change to a Game Over screen).  You have to plan to make sure you have enough ammo to take out all the waves.  As well as military zombies who drop ammo there are also a wide variety of other special zombies.  In the levels I played there were builder zombies who dropped barricades when they died which can be deployed to hold off the hordes.  You can jump but this is pretty useless as there are usually too many zombies to make this of any use. 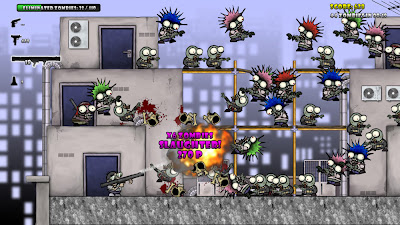 There are a wide variety of levels each with their own boss.  Starting off in an office building where zombies arrive via elevators you move onto others including a construction site and a funfair.  You unlock more weapons as you progress such as rocket launchers, mini guns and shotguns as well as get more tasks such as throwing innocents into the mix who must be protected.  Despite the cartoony look the game is quite hard and requires you to use your brain.

The game looks great, with good sound effects, it is disappointing that there is no music but judging by the trailer this is probably not a bad thing.  For only 80 Microsoft points this is well recommended.  I admit I only played the Demo (which only had 2 stages) but I am going to buy this when ever I get a job and get some cash!