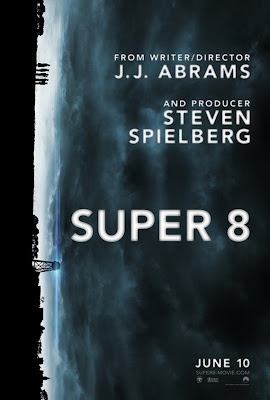 I have only noticed it recently but trailers seem to keep featuring music scores from other films.  The trailer for Stephen Spielberg and J.J Abram's (Cloverfield) Super 8 had the theme to E.T making me think it was a sequel to that film.  Talking of trailers, there was one for Tinker, Tailor, Soldier, Spy before Super 8 which had Magneto's theme from X-Men: First Class as the trailer music, stop it already, make some new music!

Super 8 takes place during 1979.  A group of kids are filming a scene for their amateur zombie film at a train station at night when they witness a catastrophic crash after a truck purposely rams into a high speed train passing the small station.  The injured truck driver warns the kids that if they are discovered at the scene then they and their families will be killed.  With the approach of a large military force the kids flee and vow to tell no one of what they saw.  Soon after strange events start happening in the children's small home Town of Lillian with people going missing, blackouts, suspicious army radio chatter, and hundreds of random objects vanishing ranging from power lines to microwaves and car engines.  It seems that the military train had been carrying something dangerous, something which escaped containment during the disaster and which the military will do anything to contain. 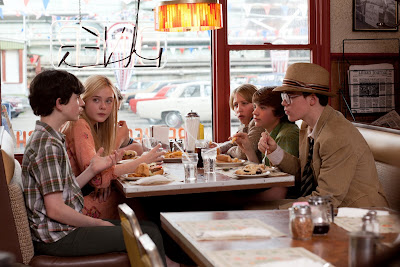 I thought Super 8 was going to be a kids film due to the main characters all being children but the film evokes a modern day The Goonies.  The kids are all endearing and likable and show a lovable innocence as they get themselves caught up at the forefront of events and their immaturity leads to funny lines and situations throughout.  The military force are shown as faceless drones bringing to mind the insanity displayed in George Romero's The Crazies with the forces determined to cover up what has happened whatever the cost, and while they never go to such drastic measures as Romeros' soldiers do they go as far as their 12A rating allows.  The film is surprisingly violent in places and with the cinemas surround sound explosions and action is made unnervingly loud.

Much like J.J Abrams Cloverfield the big evil is sparingly glimpsed for much of the film, only being revealed towards the end.  This is an effective method but unfortunately when you do get to see what the cause of events really is it cannot live up to the expectations built up by visceral scenes of destruction earlier on.  This leads me onto my next complaint which is that the last five minutes of the film are truly soppy and cheesy as Hell with every single action so blatantly obvious that it is almost cringe worthy.  It makes a good attempt but thankfully does not ruin what comes before. 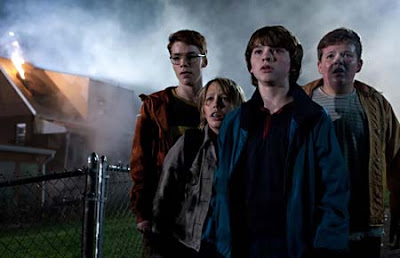 The time period of 1979 feels authentic and there is quite a lot of humorous references and wisecracks that bring life to the characters.  It really is the main cast of the oddball gang of friends that give the film its character; fat angry Charles, comic relief Cary, nerdy Martin and everyman main character Joe Lamb have a believable friendship with great acting.  In contrast the adult actors are nowhere near as good with stereotypical military dick Nelec coming across as very one dimensional and a bad subplot involving Joe Lambs cop Dad disguising himself very unconvincingly as a soldier to escape his confinement and rescue his Son which is kinda stupid.

Full of special effects, mystery and mayhem Super 8 is a real ride from start till end (well start till 5 minutes before the end).  Held together by the interactions of the children and the humour that their perspective brings on events this is a film well worth seeing.