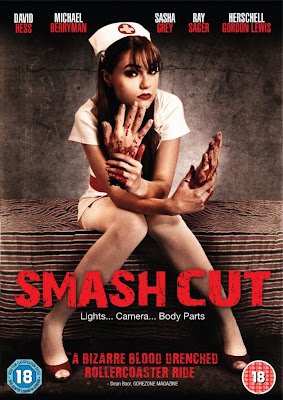 I am quite well known in some circles for my apparently truly terrible taste in films, delighted at Road Train, bedazzled by The Blair Witch 2, and laughing my guts out at Dude where's my Car?  So when about half way through Smash Cut I came to the conclusion that the film was near genius I began to worry that once again my errant taste was flaring up.

Smash Cut stars veteran actor David Hess as Able Whitman a schlock horror filmmaker who seeks solace at a strip joint after his latest 'master piece' is mauled apart by fans and critics alike for its terrible special effects.  Befriending a stripper he offers to drive her home and in his drunken state crashes his car killing her.  Unwilling to confess his crime he instead hides the body on his film set; as part of the set.  Praised for the realistic special effects (the real life corpse) Whitman becomes convinced that what his films are lacking are bodies, so he sets out on a gruesome murder spree to collect body parts.  The strippers sister (played by ex-porn star Sasha Grey) meanwhile teams up with an eccentric P.I to discover the whereabouts of her missing sister. 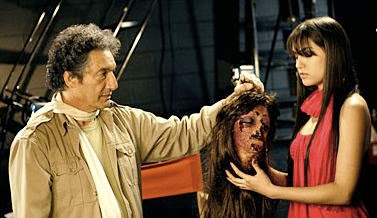 Smash Cut is a very strange and bizarre film calling to mind art house classics like The Driller Killer as well as being a homage to the films of Herschell Gordon Lewis (the splatter king director who also has a guest appearance).  Many of the shots are set up in arty ways, such as a scene played out from a cars rear view mirror, and scenes shot as if from an old fashioned film camera.

For a film that focuses so much on special effects it is a shame that the effects used are pretty terrible for the most part.  The film within a film has purposely bad effects but it was disappointing to see that the effects used for the film proper are sometimes barely better, in particular decapitations (of which there are a surprising number) usually result in an extremely fake looking head being displayed.  I don't know if that is a homage to the type of films being parodied or if it was unintentional.  There are a hell of a lot of murders in the film, and most totally over the top with Whitman in his insanity babbling and cackling with relish as he dismembers his victims, such as using a clapper board to saw off his biggest critics head, and harpooning his boss while dressed as a Sailor (ingeniously the original scene was supposed to be set on a boat, the location was changed to a bus but the Sailor disguise was never changed making the whole sequence ultra surreal!). 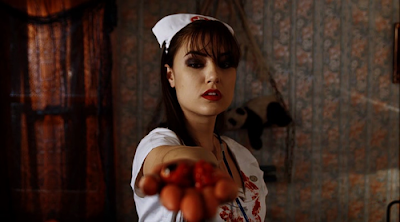 A lot, if not all the acting in the film is very bad, legend Michael Berryman is good (despite wearing a very fake wig) but the stars are Hess as Whitman and Jesse Buck as Isaacc Beaumonde who both ham up their scenes with totally over the top acting that is befitting a pretentious film director, and an over confident P.I.  An ending fight between the two is almost too much but thankfully is not too long winded.

The soundtrack is varied and has a lot of discordant Jazz that coupled with the weird P.I brought to mind heavily the cult survival horror videogame Deadly Premonition which also featured discordant Jazz and bizarre police work. 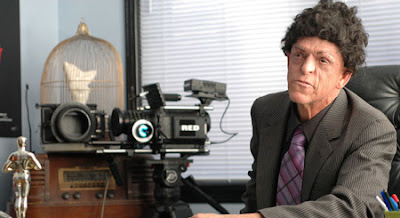 A high body count, some humorous comedy moments, and an artsy style bring together a sometimes flawed curio that tried to preach a message about the plight of independent filmmakers while throwing heaps of blood at you.  At first I was bored but it became intriguing enough for me to care.