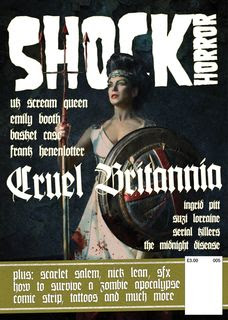 Yet again the latest issue of Shock Horror vanished in the post, once again I had to contact them to send me another copy.  Shock Horror is really settling into a groove now, some stuff is still bad but others have improved considerably.

Starting off this issue with an interesting retrospective on Hammer Horror Ingrid Pitt it moves on to the best part of the magazine; Dr Dales How to Survive a Zombie Apocalypse column which is always hilarious.  I have said before that his Podcast is not very funny, but when he writes it is gold.  The film reviews, book reviews, and comic reviews are as good as always (there always seems to be plenty of zombie comics reviewed), while the videogame reviews are as terrible as they always are. 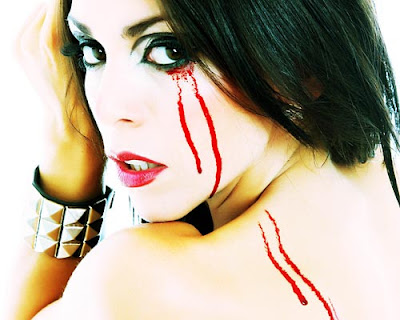 The usual articles again appear; Mike Peels boring special effects one (he seems good at what he does, it just doesn't interest me much), Mick Leans Director's Chair one (about troubles he faces directing an indie film), and Scarlet's Sanctuary which always surprises me how interesting it is.  A new hopefully regular feature launched this issue in the form of Suzi on Serial Killers which looks to focus on a different real life serial killer each time.  This time it is the acid bath killer John George Haigh whose life is chronicled; informative stuff!

A couple of interviews with indie filmmakers on their upcoming films and some interviews with horror luminaries such as Frank Henenlotter (responsible for the Basket Case trilogy) and cult British star Emily Booth round things off.  Not a bad issue, still a few teething problems, and I don't think I will ever like the amazingly slow progressing comic strip (what has happened so far could have taken place in half the time at least!).

Just to end this post to give thanks to Beck Photographic for permission to use the awesome photo of Emily Booth!
Posted by Daniel Simmonds at 08:25