Rise of the Planet of the Apes - Film Review 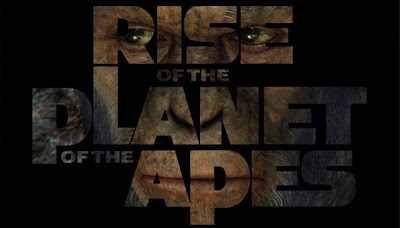 Despite buying a boxset of the original 5 films a few years back from a charity shop I have not actually seen any of them.  I figured I would wait to see this one before watching the originals.  I wasn't quite sure what to expect from Rise of the Planet of the Apes but the trailer looked interesting so I gave it a go.

Billed as a prequel to Planet of the Apes the film takes place in modern day America where scientist Will Rodman (James Franco) has discovered a possible cure for Alzheimer's via testing on lab chimpanzees.  After his star chimp goes wild and is killed the project is shut down with all but one of the chimps put down; Caesar a baby of the star chimp.  Will takes the baby home and as the chimp grows Will comes to realise that he is hyper intelligent and that his cure actually works.  After protective Caesar protects Wills Dad (suffering Alzheimers) from an angry neighbour the chimp is taken away to an ape sanctuary ruled over by Jon Landon and his cruel, sadistic son Dodge (Tom Felton) where Caesar starts a revolution with his fellow apes to escape their confinement. 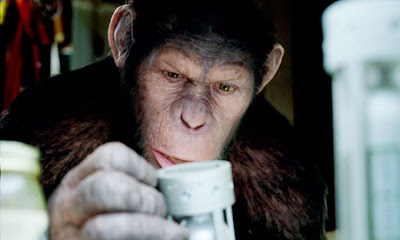 Rise of the Planet of the Apes is far more slow paced than I at first expected, the build up to Caesar's eventual revolution takes most of the film.  The first third of the film has Caesar growing up living with Will and his ill father.  In this section Caesar seems more like an excitable child than anything else, full of wonder of the world beyond his window, but also showing a love for his adopted family, such as a tender moment where he gently helps Wills sick father to hold a fork.  The next part of the film charts Caesar's imprisonment with a band of normal chimps at an ape sanctuary.  He appears truly alone here as he cannot bond with the inferior chimpanzees due to his increased intelligence and the evil wardens mistreat him making him start to hate humanity.  Finally the last part sees Caesar put a plan into motion to escape and lead his 'people' to a better land.  This is full of action, damn exciting, but at the same time sad that things have come to this.  Caesar is a wonderful character who despite being completely animated makes you really root for him due to his extreme likability.

The plot does peter out a bit toward the end where it does seem at times just an excuse for plenty of ape vs human shenanigans.  The apes goal seemed to me a bit aimless so felt like they were just rampaging for no real reason.  Caesar has morals and doesn't want any human to be killed unless he believes they really deserve it.  If you have gone to see the film based on the exciting trailer then that sequence set on the Golden Gate Bridge is awesome but the lead up is equally as compelling.  The acting is of mostly a high standard and I must admit I was pleasantly surprised by Tom Felton's performance.  He may be type cast as a bad guy but his portrayal here is far less of the sneering Draco Malfoy and much more realistic with his inclusion feeling natural. 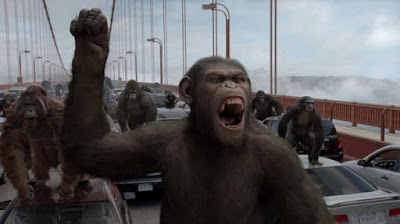 Not a good review I will admit, but for some reason I found this quite hard to do, not quite horror, not quite fantasy this is still an interesting and thoughtful film.