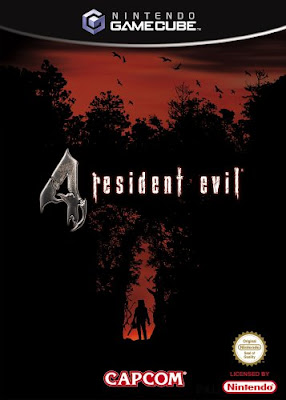 I was quite literally terrified when I saw what Resident Evil 4 was turning into.  I adored the survival horror styled slow paced events of the previous games in the series so I outright decided to have nothing to do with this 'mainstream' action game the series seemed to have evolved into.  That all changed on the day of release, I was sleeping round a friends house when I awoke to the sounds of him playing his new game.  The sounds tempted me into the front room where what I saw made me leave the house and head to the nearest shop to buy myself a copy.

Resident Evil 4 takes place in 2004 at a remote Village somewhere in Europe.  Leon Kennedy now working for the U.S Secret Service has travelled to the Village to rescue the American Presidents daughter Ashley Graham who was kidnapped by a mysterious cult.. Upon arriving there Leon is ambushed by the local population who despite acting normally for the most part (e.g: not zombies) are psychotic.  He escapes but the two local police officers he arrived with are brutally murdered.  Trapped in the Village of the damned Leon must evade the crazed townsfolk and rescue the Presidents daughter. 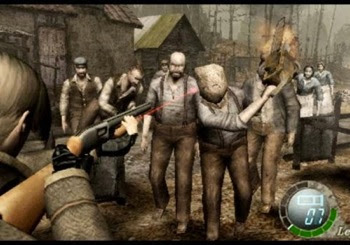 The game compared to previous entries in the Resident Evil series is far more action orientated, there is hardly any of the slow build up of fear but more a constant bombardment of crazies attacking en mass.  Despite over 20 hours of action things never get boring due to ever changing locations and events.  Starting off in the Village it seems that this is to be the games main location.  After a pretty awesome boss battle against the Towns Mayor in a burning shed I honestly thought I was at the games end, a great 6 hours I thought.  I was blown away when I discovered that this was just a small sliver of the game!  There is so much variety in this game, is quite ridiculous.  There are sniper sections, puzzles, turret sections, sieges, action, action, action, horror, adventure and excitement.  The way this game never lets up pace from start to finish is something to behold.  A constant stream of new enemies, amazing bosses and stunning locations!

The main enemies in the game are Ganado's who are the local crazed population.  Starting off as villagers wielding sickles, pitchforks and axes these change up to medieval style cultists armed with swords and crossbows to Soldiers armed with more modern weaponry.  A multitude of other enemies also abound; mutant dogs, giant insects, hulking ogres and Killer 7 rejects.  Bosses are many and varied from a fight with an aquatic monster in the middle of a lake to fights with chainsaw wielding maniacs and giant plants.  None of the enemies from previous Resident Evil games appear but their absence is not missed. 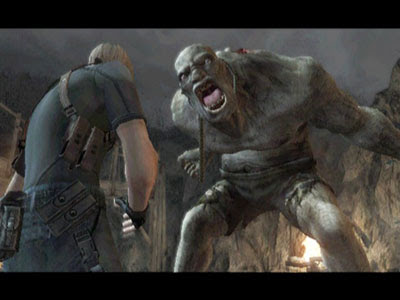 The plot is quite cool even if it is nothing really special.  The new characters introduced are ace though; super solider Krauser and Victorian midget Ramon Salazar being particular highlights.  The game is influenced from a lot of things, there are sections that bring to mind the claustrophobic terror of Alien while other areas echo The Crazies and in particular French b/w zombie flick Grapes of Death.  The film Dagon released previous to Resident Evil 4 has a whole section in it that is replayed in the game (a siege from violent villagers).  One section in the game sees Leon going down a white corridor avoiding deadly laser traps; a blatant homage to the first Resident Evil film.

Enemies drop gold, and dotted around the levels are treasures that can be exchanged with meme-tastic shop keepers "what are you selling?" to get new weapons, armour, ammo, and larger holding cases.  Weapons are many and can also be upgraded at the shops.  There are a variety of pistols, magnums, shotguns, machine guns, rocket launchers, and more.  A stupid amount of weapons.  You can only carry a certain amount of equipment though as it must fit into your briefcase Tetris style. I haven't even mentioned the additional play modes such as the amazing Mercenaries mode. 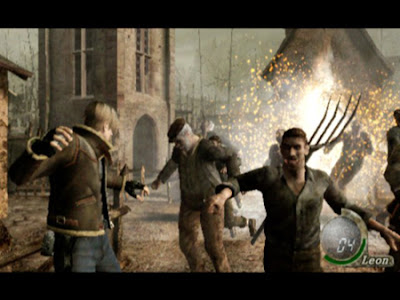 There is nothing quite like this game, and no better in the genre.  Even Resident Evil 5 aped this game but despite being fun failed to be as good (due in no small part to the hideous forced co-op that just does not work in single player with an A.I controlled monstrosity).  It led to the Sci-fi Dead Space series as well as killing off the traditional survival horror games of old. A sublime game that everyone should play, a true classic in every sense of the word.

Posted by Daniel Simmonds at 10:06