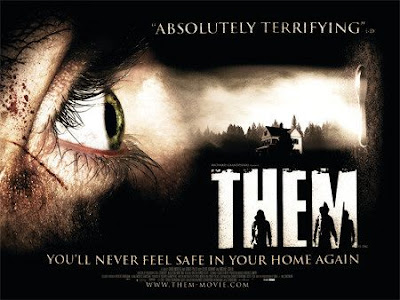 Iils (or Them as I am going to refer to it) is a French horror film set in Romania.  Much like The Strangers the film is about a couple being terrorised in their own home by a mysterious group of people.

Clementine and Lucas are a French couple who have recently moved to a small Town in Romania.  Clementine teaches French at the local School, while her writer husband stays at their remote country home.  One evening while they are relaxing at home strange things start to happen.  Starting off with prank calls and a stolen car their evening turns to terror as they realise that they are under assault from a group of hooded strangers who seem intent on murder.  Working together they must escape the house and find safety.

The whole film is subtitled but this was never an issue for me, it really reminded me of The Strangers with a similar set up.  Where that was a little too slow paced for me this also enjoys a sedate start, both films mirror each other quite a lot with events in both starting off with pranks and car sabotage before devolving into more violent going ons.

The location is really great.  The big country house the couple live at is scary enough on its own, all overgrown fields and woods surrounding the place, the house is cavernous and dilapidated with creepy paintings on the walls and a ruined greenhouse attached.  Half the house also seems to be under renovation with plastic sheeting up and walls missing.  Half a house is hardly the safest place to take refuge!  The house has narrow corridors, rusty locks, and creepy attics which really makes what happens all the more scary.  Later on a change in location if anything ramps up the terror all the way to the end.  The film is near blood free with a lot of things implied rather than seen and Them cleverly avoids the many jump scares that make up American horrors. There are some though such as a great scene which put me off ever wanting to spy through keyholes! 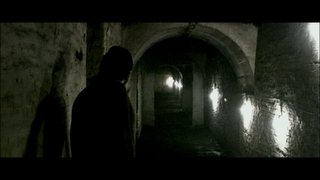 The main characters of Clementine and Lucas are played well with some good acting, Clementine is determined and does quite well considering her ordeal shes goes through.  Lucas on the other hand spends most the film moaning and complaining, one sequence in which Clem is being attacked all Lucas can keep repeatedly saying is "What's happening? Where are you?" as if she is in any position to respond; patience Lucas!  The aggressors (as the film is titled Them it is hardly a spoiler to say there is more than one) are irritating even if they do get the fear going.  I always want to see the attackers get their comeuppance in films like this, it's just attention seeking when you mess around with lights and sound to goad your victims so you deserve to be killed.

Talking of sound and light these are both handled well.  To begin with it is noise the attackers use to scare the couple; playing loud music, turning on the house TV, making strange noises but as the film goes on sight becomes the weapon of choice with the attackers repeatedly playing around with the lights, waiting for their victims to go into a well lit place before suddenly turning off the lights, or blinding them with flash lights they all carry. 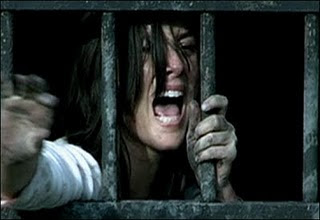 I wasn't expecting to find this as scary as I did, quite similar to The Strangers but with a stronger second half this is one French film I will gladly recommend.