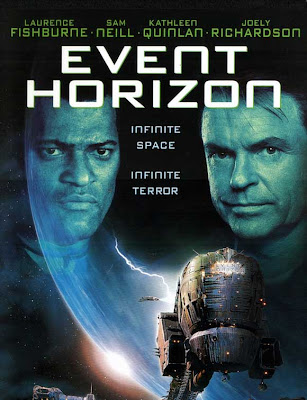 Some reviews write themselves, some have to be pried out my head and vomited onto screen, Starting off on a bum note but this has taken me all day to write, it is trash! Alas even I have off days.

Event Horizon is a classic cult British sci-fi thriller released back in 1997.  I first become interested in it after learning that the survival horror video game Dead Space was in part influenced by the film.  On a side note it is fun to see the mixed relationship Event Horizon and the game Doom have.  Event Horizon uses a Doom sound effect at the films start while the plot of Doom 3 is very similar to Event Horizons. 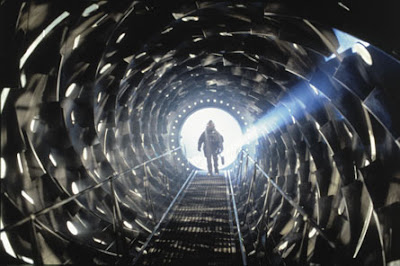 The film takes place in 2047, a search and rescue vessel under the command of Captain Miller (Laurence Fishburne) is seeking out an experimental ship called the Event Horizon after receiving a distress signal 7 years after it mysteriously vanished on its maiden voyage.  Along with the crew of the rescue vessel is Event Horizons creator Dr William Weir (Sam Neill) who wants to discover just what happened to his ship.  After arriving the crew are puzzled to find it completely deserted.  While exploring the ship they start to have vivid hallucinations that seem to point to the fact that something terrible has happened on Event Horizon.

Event Horizon takes quite a while to get going, and up until the last quarter is a slow paced affair with lots of long atmospheric creeping about.  Until that last part I was beginning to think that the film was not what I had expected, sure I was enjoying it but it was maybe a bit too slow, and a load of the characters in the film are irritatingly stupid, especially a woman nicknamed Mama Bear who follows a hallucination of her son to her doom despite the fact that if she had two brain cells it would be astonishingly apparent that there was no way on God's Universe her child could be on the damned Event Horizon.  The other characters vary between annoying, plain and mean but the film still finds room in its limited main cast of 7 or 8 to include a token black comic relief guy (he is a welcome relief as much the film is bleak and dark). 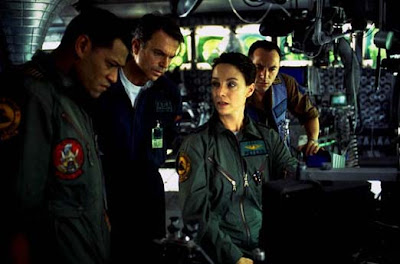 It sounds like I didn't enjoy the film, but I did, it doesn't help that I watched it in chunks rather than in one sitting, that always interferes with my enjoyment of films.  The director Paul Anderson has stated that a large amount of violence was cut out of the film to get his film rated, as such you would expect it to be quite tame but no; there is plenty of gore with self mutilation, and inventive killings.  The film also pays heavy homage to The Shining, almost like a Sci-fi remake of that film at times with rivers of blood, possession, and even two creepy blood soaked girls making an appearance.

Starring quite a few famous actors and with a intriguing plot Event Horizon is a great little sci-fi film combining elements from some of the best horrors to make for a thrilling ride.

I have put seeing this film off for too long. Nice Review!