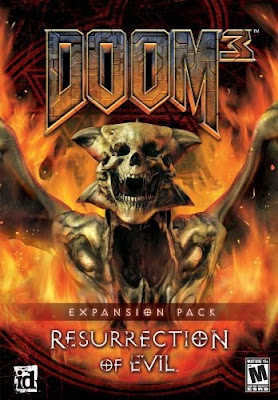 Doom 3: Resurrection of Evil is an expansion pack that was released soon after the FPS Doom 3 came out.  It features additional enemies and weapons in a self contained story.

The game takes place 2 years after the events of Doom 3 that left an entire research colony bar 1 plucky Marine dead after a gateway to Hell was accidentally opened. A life sign is detected in the Martian ruins and a new team of scientists are sent to Mars to investigate.  You play as a Marine who is with a team searching for the life sign which you find in the form of a bizarre Martian artifact that resembles a living heart.  Drawn to the mysterious object you reach out and touch it, instantly releasing the denizens of Hell once again.  This time the forces of Hell are led by a demonised Dr Betruger (the human antagonist of Doom 3) and his three Hell Hunters who want the artifact.  Your instructions are to bring the artifact to a head Scientist at the Mars base to work out what it is and what to do with it. 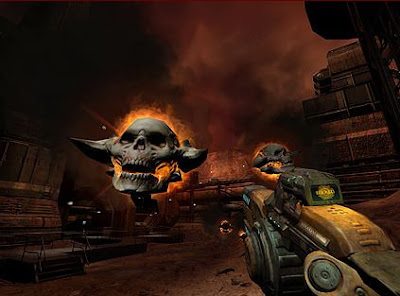 Being an expansion the game is quite a bit smaller than Doom 3, it seems like a whirlwind tour of various locations that feature none of the build up that Doom 3 enjoyed.  Almost right away you gain access to a Gravity Gun (must have been influenced by Half Life 2), the gun can be used to catch enemy projectiles and fling them back, usually with deadly results.  This weapon does feel a bit tacked on, and can be fiddly swapping between it and your other weapons.  Another new weapon is the double barrelled shotgun that is very slow to reload but at close range is the games most powerful weapon.  You are also able to use the artifact which basically initiates bullet time once activated, upgrades give you first speed, then later on invulnerability.

There are quite a lot of locations but you race through them too fast to really appreciate them.  Starting off in some Martian Ruins you work your way to the new research base before revisiting some old locations from the original games research base (that has deteriorated into being split between dimensions) and then onto a jolly old jaunt through a monster infested Hell.  Doom 3 did not have much of a story but this one has even less, again you can collect files and audio logs off of dead people but there are far less of the, and for the most part they are not as interesting to read. 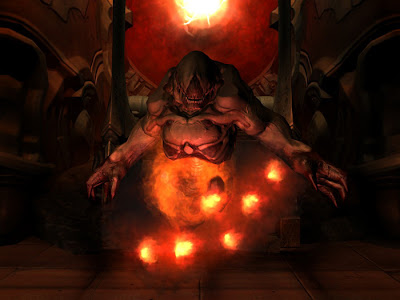 All the old enemies from Doom 3 return, as well as a couple of new ones but apart from formulaic bosses the new enemies are quite similar looking to the murky originals.  The game does include quite a few zombies including new ones in the form of bio hazard suit wearing zombies encountered in the sewers, and naked zombies roaming the old Science base.  Resurrection of Evil cannot be called a pretty game, and seems to have a few more bugs than Doom 3 had such as skipping speech, and issues with selecting different weapons.  It is worth playing if you have played Doom 3 as it clears up that games cliffhanger ending but it is nowhere near as fun or well designed as that game was.

Additional content on the disc is Doom, Doom II, and Ultimate Doom which are all worth playing if you don't already have them.