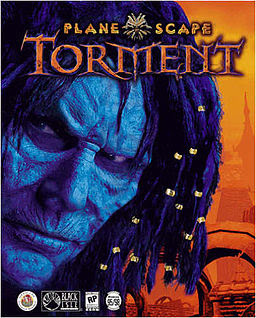 Long have I heard that this Dungeons and Dragons RPG was a cult classic, I used to have a friend who raved about it.  With the games arrival on Good Old Games a few months back I immediately snapped it up.

Planescape: Torment takes place in a bizarre fantasy realm where different planes of existence co-exist.  The game starts with you The Nameless One awakening in a mortuary in the giant City of Spire.  You have no memory of who you are, or where you are and it turns out you are immortal.  With the assistance of Morte; a talking floating skull you discover cut into your back a message telling you to seek out a man named Pharod.  Seeking him out you aim to discover your lost memories. 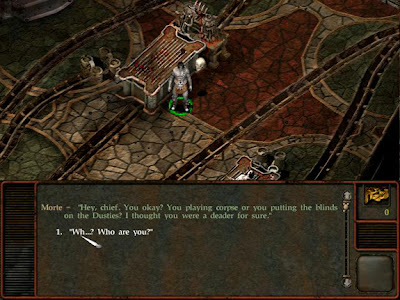 Different to many many RPG's (role playing games) Planescape features a heavy emphasis on talking to people over actual combat.  About 75% of the game has you in various Towns and Cities doing quests for towns folk, discovering your past and talking.  There is a books worth of script in this game.  Most of the hundreds of people you encounter have unique dialogue which gets quite lengthy.  To play this game I had to ensure I was in a reading mind set rather than an action one.

The plot is clever and interesting with you learning things at the same pace as The Nameless One rather than him having some knowledge the game had not revealed.  Some information unlocks memories and new skills, while many of the people of the world have met you previously and react accordingly (it seems your previous incarnations have not exactly been good people).  Through events you learn about your past as well as encounter help and hindrance from gifts and traps your past selves have left for you.  The story gets really quite clever, I don't want to ruin it but cool things are revealed.  Sadly towards the games end the outcome falls a little flat with some less then stellar revelations. 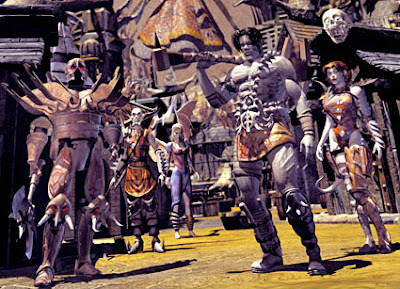 Being a fantasy game there are lots of monsters and creatures, the world of Planescape is one made up of a multitude of beings from Angels, Demons, Succubus's to Humans, Zombies and Rat collectives.  It is a bleak place full of treachery and lies set around a never ending epic war 'The Blood War' that has been raging since time immemorial.  The world is confusing but interesting and makes for a unique setting.  A morality system lets you be as good or as bad as you wish, adjusting to your actions.

Combat in the game is ok but can get fiddly.  The game is controlled solely by mouse, so you click on enemies to fight them.  Later in the game when you have more characters (you can have up to six in your team) combat can be frustrating as characters get stuck in scenery, get lost, or ignore your commands.  Enemies drop loot but collecting it can be troublesome when your team refuse to move out the way to let you through.  On one occasion I had to start a war with a bunch of friendly Were-rats simply because one was standing on a small bridge and my avatar couldn't work out how to walk around him.

The game is geared towards conversation rather than fighting which led to me being a little underpowered and finding myself in some frustrating situations later in the game due to my weakness.  While you are invincible your team mates are not and need to be resurrected should they fall making a packed screen a chore to navigate.  The game frequently crashed on me but I blame this more on my PC I think.

Despite all the frustrations of movement the game was really quite immersive and enjoyable, defiantly a classic, and one that kept me enthralled all the way to the end.

Posted by Daniel Simmonds at 05:08