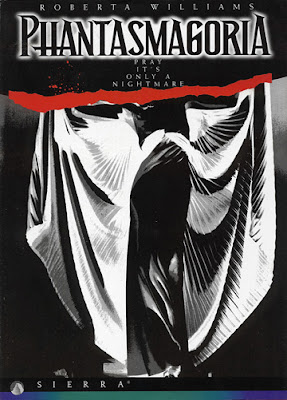 Phantasmagoria is an FMV point and click game that takes place in a setting that reminded me of Knightmare in its look.  I had heard tales of the controversy surrounding the games violent death scenes so when I saw it was on Good Old Games I picked it up.

You play as a writer named Adrienne Delaney who has recently moved into a spooky old mansion that used to belong to a magician called Zoltan.  Soon after moving in you start to have horrific nightmares.  While exploring the house you encounter lots of supernatural phenomenon and accidentally release an evil spirit that possesses your husband Don.  During the course of the game you must discover the violent story of Zoltan and his five wives and stop the evil. 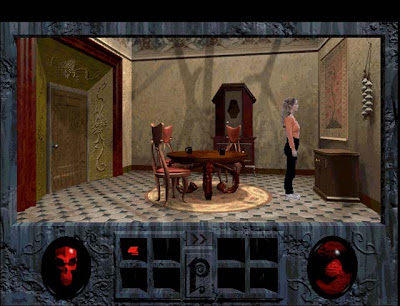 The game was touted as an interactive movie, the whole game has the style of a point and click but everything is acted out by a very bad actress Victoria Morsell who plays your avatar.  As a result everything takes time to do, even searching a shadowy corner of a room can take several minutes due to the actress taking her sweet time.  The game takes place over seven chapters with your main location being the large house.  It seems strange that the couple would buy the mansion when they obviously have not seen most of it due to it being all locked up, but I guess it needed to give you a reason to have puzzles to solve.  The mansion is quite large and is full of secret passages, secret rooms, and ghostly goings on.

The plot is not great, but is made worse by the awful acting on display.  Everyone from the main cast to shop keepers and ghosts are all terrible and give the game the feeling of a really badly made film.  Least with a film it only lasts 90 minutes but this game took about 6 hours to beat.  The acting rips out any horror that might have existed.  Admittedly the flash back sequences showing how Zoltan's many wives died was entertaining (one wive force fed offal till she suffocated, another had a wine bottle smashed into her eye). The most shocking part of the game was when your character gets raped by her husband, despite the naff acting it was still not a pleasent part of Phantasmagoria.  Kinda off putting that despite being set over a week no character changes their clothes at all! 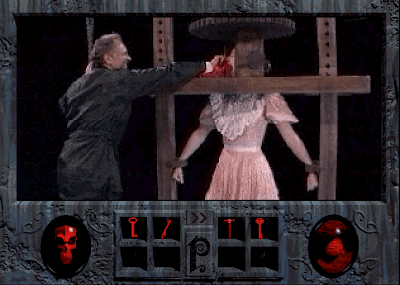 The game is simple when you know what you are doing, and an in game hint provider helps you from getting too stuck but the game just is not that interesting and quite slow paced.  The last section of the game turns into  a near on rails flight that sees you having to do things under strict time limits while being chased, but my game got glitched to death with an essential item vanishing from my inventory followed by my save file vanishing, thank god for YouTube though.

A bad game, and a good advertisement for why FMV games suck, but as a curio it was interesting.

Posted by Daniel Simmonds at 14:23