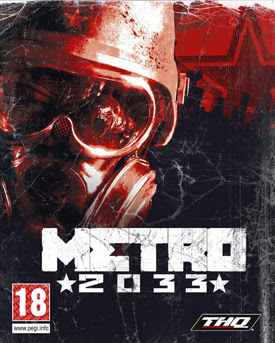 Long have I put off playing this game, mostly because I didn't want to be playing two similar games at the same time.  Due to my having a hiatus from Fallout: New Vegas (can't afford the DLC!) I entered the murky world of Metro 2033.

Metro 2033 takes place in a post apocalyptic Moscow, 20 years after the nukes fell and turned the world into a wasteland of ruined buildings and a never ending nuclear winter.  The survivors of this war live underground in Moscow's metro system, each station having been turned into its own small settlement.  You play as a settler from Exhibition Station whose home has come under threat from mysterious creatures known as the 'Dark Ones'.  To counter this threat you are tasked with travelling to the far away station of Polis to get help to save your people from annihilation.  To get there you must brave the horrors of the underground, battling through countless terrors, and also brave topside where hellish creatures roam the sky and the air is toxic. 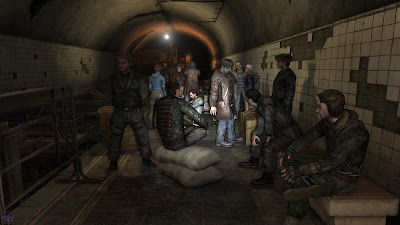 The game is a first person shooter that has a lot of survival horror about it.  For the most part the game takes place in the sewers and tunnels beneath Moscow.  At first these locations felt claustrophobic to me but I grew to love them as the surface is really not a nice place to be.  The story while quite a basic one gives your character (Artyom) motivation to keep going.  From start to end the game is one big roller coaster ride of set pieces and scripted moments never getting boring.

Each station you arrive at can be wildly different to the last, friendly stations give you time to relax from the nightmares of the tunnels, walk around listening to peoples stories, do some shopping (in the game world currency is in the form of bullets) and soak up the atmosphere.  Some of the stories told can be quite affecting, in particular one old mans story about what happened when Moscow got destroyed; he recounts tales of men openly weeping over the military radio band and of submarine crews suddenly discovering they are on their own.  Later the stations get less safe with stations being in the process of over run, abandoned, haunted, taken over by bandits, or destroyed.  A particular memorable section sees you travelling through an eternal war between two neighbouring stations, one run by Communists, the other run by Nazis, the whole level feels like a fever dream with both sides spouting their ideologies at each other while fighting over ruined railway bridges. 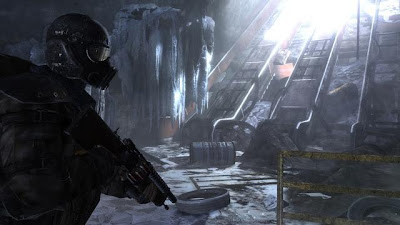 The game has an underlying religious tone to it, the monsters are described as demons while a deep descent into a military base is described as descending into hell itself.  One character theorises that the apocalypse destroyed not only Earth but also Heaven, Hell and Purgatory as a way to explain the ghosts and monsters.  This theme is never really explained though and is left up to you to decide if that is what is really going on.

The game is split up into levels, each level preceded by a loading screen that has Artyom's inner monologue on events that give him character that his silent in game portrayal never provides.  There is a lot of variety, sometimes you are on your own, other times you have company, there are stealth sections, turret sections as well as pure survival horror, action, and platforming.  The most vivid sections and tense sections are when you go up into Moscow.  You have to wear a gas mask that is liable to cracking, and must be resupplied with new filters, your level of oxygen is measured by looking at your wrist watch that has a timer built into it, the game leaves it up to you to look after yourself, it does not hold your hand and tell you when you are nearly out of air, or when it is safe to remove your mask.  Action gets quite stressful with your gas mask getting covered in condensation and Artyom's breathing getting heavy. 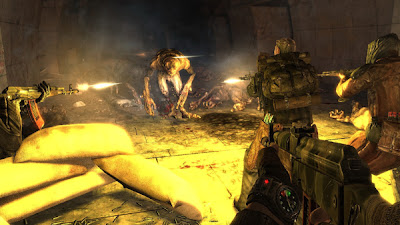 Most the game sees you fighting monsters, large rat creatures, demonic bats, gorilla creatures and more who usually attack you in droves leading to desperate last stand moments.  Human enemies consist of bandits and Nazis who use cover but are quite weak but whose tactics make combat more engaging than the monsters who just try and defeat you with numbers.  To fight these enemies you have a variety of weapons, throwing knives are surprisingly effective for stealth use, other than that I spent most the game using my trusty automatic shotgun (complete with blade attachment!) and a cool machine gun.  Dead humans litter the levels and these along with downed human enemies leave you with lots and lots of ammo so that is never a concern.

Metro 2033 is a really atmospheric game, it creates the feeling of a bleak and miserable place where humans are on the verge of extinction and all hope is gone, like Fallout it creates stories with objects and bodies in the surroundings but this game has none of the overt humour that Fallout is known for, despite the mutants everywhere this world is a far more believable place and more horrific for this reason.  A sequel Metro: Last Light has been announced, I can't wait!  The series is based on a Russian novel (also called Metro 2033) that I am very interested in reading.  Metro 2033 is a heck of a ride from start to finish.

Posted by Daniel Simmonds at 06:59