Yeah, I know, here I am again with yet another X-Box Indie game to review.  It is not my fault that so many people make games featuring zombies, or that the majority of those games are trash.  With a title like Endless Midnight: Zombie Swarm I was prepared for more garbage.

The game is a twin stick shooter (surprise, surprise) that has you playing as a lone gunman trying to survive waves of zombies.  It takes place at night time either on a dark field or a dark parking lot so vision is impaired somewhat.  After each wave you get to spend points (from killing zombies) to purchase weapon upgrades, new weapons (the usual suspects) and health. 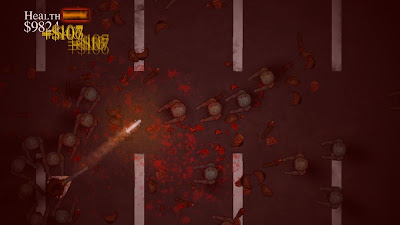 It is as generic as they come, there are a billion identical shooters on the X-Box Indie channel but at least this one is competent at what it does.  A slighter closer view of the action means you have less room to maneuver from the hordes.  For the most part the enemy is zombies, there are some giant zombies as well as the odd Demon that appears.  They all look quite good, solid looking at least, and incidental details such as your character getting coated in blood is a nice touch.

There are a heck of a lot of game modes, though all are mostly similar.  Along with Survival mode you have a mode where the screen is pitch black apart from your flash light beam which is cool.  Other modes include variations on what items you can and cannot use. 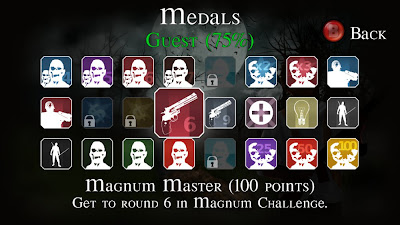 Another twin stick shooter but this is well made and at 80 points should be a purchase if you feel the bizarre need for a zombie twin sticker.