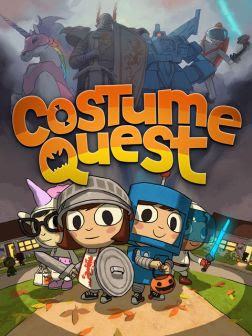 Costume Quest is one of the four special projects that Double Fine are working on (the legend Tim Schaver's company).  It is a comedic RPG set during Halloween.

The game starts with young twins Wren and Reynold leaving their parents house to go trick or treating on Halloween night. After arguing about their costumes Wren (or Reynold depending on what character you choose to play as) leaves to trick or treat alone. The first house the sibling goes to however contains a monster who mistakes them for a giant piece of candy (as that is their costume) and runs off with them. Discovering the whole town is full of candy loving monsters it is up to the brother/sister to rescue their twin and foil the plan to steal all the towns candy. 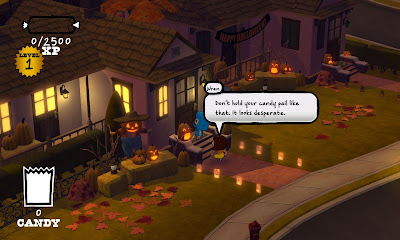 Costume Quest is a turn based RPG that sees you battling as the costume you are wearing. As you progress through the game a wide variety of different costumes can be found letting you battle as lots of different things such as a robot, vampire, ninja, and even a packet of french fries. Each costume has its own special power that takes three rounds of a battle to charge up (such as the Statue of Liberty's patriotic healing move complete with bald eagle, Abe Lincoln and stars and stripes). Some costumes have abilities out of battles also such as the knight costume that can shield your party, and the space man costume that has a light saber used to light dark places.

There are three main areas in the game; suburbia, the mall, and a village. Each of these locations is full of kids who offer side quests (such as finding them a trading card) as well as houses and shops to trick or treat at which rewards you with candy that can be used to buy badges that give you extra abilities in battles. The characters you encounter all have quite funny lines of dialogue as expected in a Double Fine game. 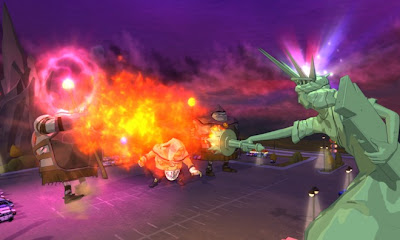 The plot is really simple but is done light heatedly with enemies consisting of incompetent bird creatures and goblins. The kids all see the town as under invasion by monsters but it is telling that the adults cannot see these creatures, at one point a security guard you meet refers to them as troublesome teenagers calling into question whether the whole thing is in the children's imagination.  This just makes the game all the more fun and light. The game is very easy, and not too long, around four to five hours in total, meaning the game never gets boring despite the nearly too simplistic fighting.

DLC has been released that gives a new story but at the moment I cannot afford that. For a fun, light, and frequently humorous RPG you need look no further than Costume Quest.

Posted by Daniel Simmonds at 11:11