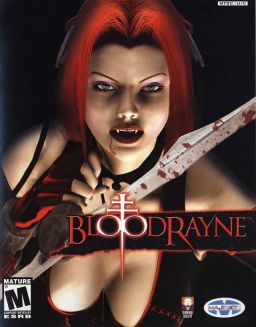 BloodRayne is a game with a real grindhouse premise to it. Basically you are a female vampire who fights Nazis and that's about it.

Rayne is a half vampire who works for a mysterious group known as the Brimstone Society. The game mostly takes place in 1938 where Rayne's latest mission is to take out the German Nazi high command, including a man known as Wulf who is seeking out the lost body parts of an ancient deity known as Belial in order to obtain ultimate power. 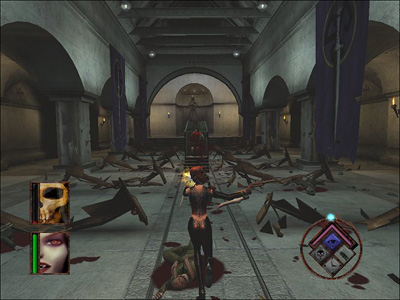 The game is a third person action one, you are equipped with blades strapped to your arms, as well as able to use weapons dropped by enemies. Being a vampire you have fangs, pretty much any enemy in the game you can fix yourself to and drain there blood recovering lost energy in the process. You can jump ridiculous heights, as well as use your vampire sense to go into bullet time, locate objectives, and later gain a sniper style scope ability. You are quite brutal to your foes with the addition of a 'Blood Rage' mode (that you get from fighting) you literally cleave Nazis into little pieces, so quite a bloody game.

For the most part BloodRayne takes place in two locations (as well as a cool opening level set in the swamp lands of Missouri).  The first location that roughly half the game occurs in is a giant Nazi base made up of many different areas such as mines, factories, living quarters and submarine pens. During your assault on the base loudspeakers bark out instructions, while a second assault occurs from an unexpected source. The second half of the game takes place in a remote ruined castle in Germany where a family of vampires live. Nazis are your main enemy and come in many different flavours including jet pack Nazis and zombie Nazis. Other enemies include plant based creatures as well as a host of vampires that resemble cats. There are plenty of bosses, mostly Nazi commanders, with the exception of the end boss these fights are not too hard. 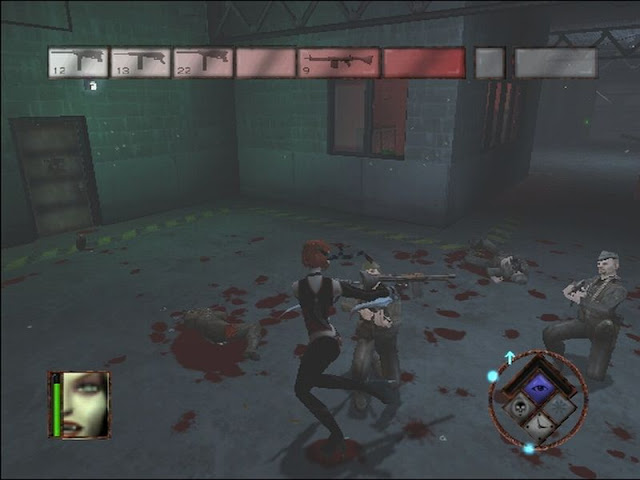 BloodRayne is quite fun to play but there are some annoying platform sections that are not helped in the slightest by dreadful camera and invisible walls that impede your progress to an awful degree. It's also a very murky game, it can be quite hard to see in a lot of places especially outside in the castle levels, though on the plus side checkpoints are numerous.

Not a bad time to be had with BloodRayne, but quite dated in look now with some dodgy CGI cutscenes and has quite a predictable, boring story. Lots of blood, Nazis and vampires create an enjoyable experience if not a great one.

Posted by Daniel Simmonds at 09:32