Zombie: An Anthology of the Undead - Zombie Book Review 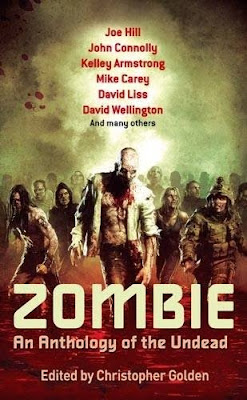 Quite an original title for a collection of short tales about zombies?  It has been a while since I last read a zombie anthology, they can be a bit hit and miss.  This tome collects together 19 short stories from both new comers to horror fiction as well as masters such as David Wellington (of the Monster Nation trilogy of zombie apocalypse) and Max Brooks most known for his Zombie Survival Guide book.

The foreword stated that it wanted something different for it's zombie tales, not the usual zombie story,  for the most part it is successful with a variety of different takes on zombies.  It starts off well with a story that follows what happens to Lazarus after Jesus resurrected him (a tale from the Bible) and pretty much carries on well.  There is a classic apocalypse tale reduced down to a small village that has been cordoned off by the military, stories about a zombie stuck on a church spire, a zombie found chained to the bottom of the sea, all of which are entertaining, and interesting.

Max Brooks World War Z story is nothing special, I have never found his World War Z Universe particularly interesting, while Brian Keene's entry is so similar to a section of one of his books that I at first thought it wasn't an original one, but it turns out that he must just like writing about husbands in bunkers being haunted by zombie wives as it is marginally different.

A couple of the stories include elements of the ongoing Afghan wars in differing ways, one reminding me heavily of the film Dead Girl with Kids and Their Toys (quite a grim, disturbing story), the other war story Weaponized is far more interesting take on the subject.  I take um-bridge with Joe Lansdale's Shooting Pool as it has absolutely nothing to do with zombies whatsoever, it feels really out of place and is a strange addition.  Special mention must go to Joe Hills Twittering from the Circus of the Dead that is set out as a series of Twitter updates sticking to the 140 character limit per Tweet which is cool.

Mostly a good collection of stories, let down by a few duds but with all the stories being short in length even these don't outstay their welcome.

Posted by Daniel Simmonds at 06:48