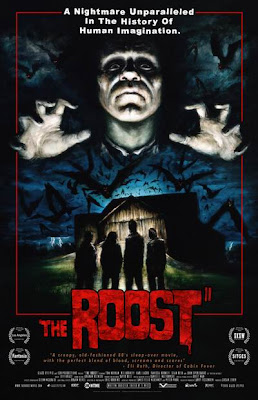 This is again another of the hallowed horror DVDs I got for Christmas.  The Roost I initially thought was a late 70's/ early 80's film, I must say when I discovered it was made as recent as 2005 I was surprised!

The Roost has four youngsters on their way to a friends wedding, having taken a wrong turn they are lost in the American countryside, as it gets later and later they get more and more tired and impatient.  After a bat flies into their windscreen the car they are in crashes into a ditch, unable to get the car moving they head off to look for help.  Coming across a farm house their hopes are dashed when they find the place to be deserted but a chance encounter with a friendly Cop gives them hope.  As they gather up their group they chance upon the farms gigantic barn, a barn that hides a swarm of flesh eating vampire bats...

The film is an odd one for many reasons.  Bookended at the start, middle and end of the film are bizarre black and white fright night style scenes with a campy, tacky horror set where a ghoulish presenter introduces and comments on the main film.  When I first saw this I thought it was quite cool, the problem is that the main film in The Roost is deadly serious and not played for campiness or laughs so it is very strange when halfway through the proceedings the film cuts to the cruddy presenter section again.  The film ends as well with the presenter section which is bizarrely and quite awkwardly turned into a straight horror piece.

The Roost's main story of the four lost teenagers is very well done.  The film is ultra grainy, a visual choice that creates the feeling of a old 1970 's horror.  To go with this look of an old film the direction is very very old fashioned, worthy of a Hitchcock terror.  Lots of suspenseful long shots with little happening, nearly all the action happens just off screen, and wonderful, genius use of light and shadow. 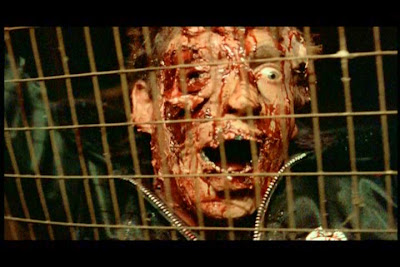 There are only seven characters in the cast, the isolated setting, and the fact that the film happens in real time creates a life like situation with the teenagers reacting realistically.  Fully expecting the usual thing of everyone screaming and being hysterical I was delighted to find that they acted more like I think I would act.  The fact that the film takes place late at night with exhausted characters is shown in the way they handle things.  They are all obviously very tired, hardly talking to each other and getting into small arguments.  This may go a bit far in that they sometimes look too unconcerned and emotionless.  The characters come across as real;  there is a brother and sister who are not getting on too well, the brothers best friend as well as a loner who none of the group knows that well all who manage to be neither annoying or entertaining.

The vampire bats have the ability to turn their victims into flesh hungry zombies, this was a surprise to me as I didn't realise it was a zombie film until the moment the first zombie bursts onto the screen, I was convinced it was just a animal horror film.  The bats are not that realistic looking but they are used mostly in long shots so their bad design isn't too apparent.  The zombies are of the slow, stupid style but the minimal use of them gives them the sense of being a terrible nuisance with the bats being the main perceived threat. 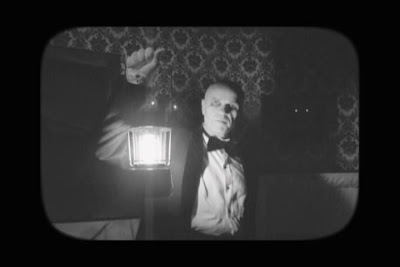 If the film had been confident enough to stick to the one style it would have worked, as it is the black and white sections feel totally out of place and intrude on what is otherwise a tense, bleak affair.  At just over an hour and a quarter long I guess maybe they stuck in the naff presenter sections as padding, a real shame.

Posted by Daniel Simmonds at 16:09