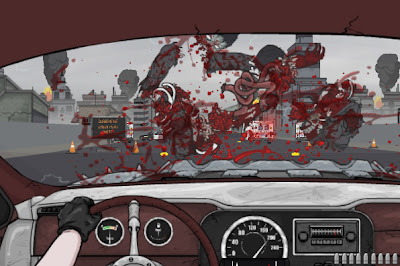 I must say that I do quite like Newgrounds, it never fails to provide a slice of quick entertainment.  Road of the Dead is one such game, a first person driving game. Road of the Dead can be found here.

Road of the Dead starts with a mechanic in his garage working on his car.  Over his radio he hears an emergency report saying that the City he lives in has come under martial law and that no one is to go outside.  Hearing groans and screams he decides to ignore the warning and instead escape the City.  Heading out onto the freeway the mechanic must brave zombies, crashed vehicles, as well as soldiers and military checkpoints. 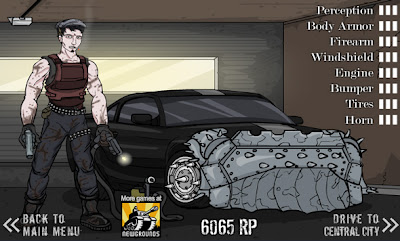 The game has you behind the wheels of a super car, with your view from behind the wheel.  Your radio is tuned into the military band and so you hear the armies plans to stop you as you drive.  Ploughing into zombies sounds like a good thing but they can get stuck on your bonnet, crack your windscreen, and obscure your view with their blood.  Eventually your windscreen will shatter leaving you at the mercy of machine gun bullets and clinging on zombies.  Take too much damage and your car will ignite requiring water that can be found by driving into water buckets.

The game is controlled via the keyboard and features many buttons as well as the ones used for driving.  You have a horn that can be used to attract zombies, or scare off panicked pedestrians, window wipers help clear off the blood from your view while you are able to punch zombies (or your windscreen if you so wish).  Along the route there are many obstacles, mainly crashed cars and lorries but the army lay down spike traps that screw with your driving and later on military helicopters turn up to stop you. 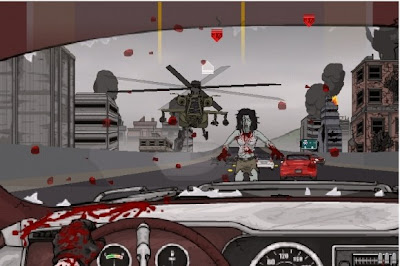 Dying is not the end though, once dead you can start from a checkpoint (each military blockade you reach counts as a checkpoint) and between goes you have access to the mechanics garage where points earned can be used to soup up your car as well as yourself (like getting special vision that lets you more easily spot various items and people).

The game may be quite repetitive but the upgrade factor makes the game more fun, as does the exasperated orders given to the army to stop you.

Posted by Daniel Simmonds at 06:40

It's a pity you don't have a donate button! I'd cerainly donate to this outstanding blog!

I guess for now i'll settle for book-marking and adding your
RSS feed to my Google account. I look forward tto branmd new updates
and will talk about this blog with my Facebook group.
Talk soon!