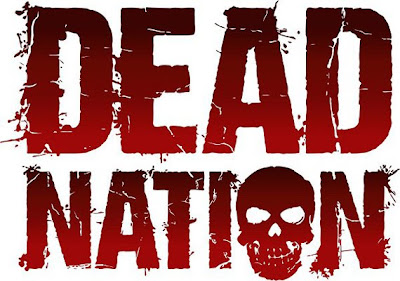 Dead Nation is a downloadable PSN game and was offered free as part of the Sony Welcome Back package.  As I am poor this gave me a good opportunity to finally play the game.

Dead Nation is a top down shooter that bears many similarities to Left 4 Dead. In the game you play as either a man or woman who has survived the zombie apocalypse by being immune to the disease which has claimed the lives of pretty much everyone.  After your hideout starts to run low on supplies you head out onto the infested streets in search of something new, soon after you locate a radio that gives you hope of salvation, but first you must locate patient zero; the origin of the zombie condition. 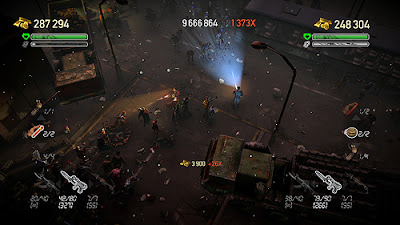 The game has a lot of story which is fresh for this type of game.  The intro sequence has a series of real life riots and protests mixed in with reports of zombie outbreaks, reminded me heavily of the opening to Dawn of the Dead (2004).  The game itself features static cut scenes between levels explaining the characters motivations.  Though the art and voice over is different for the two different characters their lines are almost identical which is a missed opportunity to make a second play through feel more fresh.

The game takes place over ten detailed levels taking in locations such as hospital grounds, streets, docks, graveyards and parks.  The levels are hyper detailed and look quite fantastic with expert use of light and shadows.  Incidental details really give this game a loving touch; the hospital is littered with body bags, streets are full of burnt out cars, while everywhere there are discarded barriers, piles of junk and warning signs.  Levels are bottle necked with the inclusion of barriers stopping too much exploration.  Between areas are save havens where you are able to buy upgrades, new weapons and equip found armour.  Weapons you can get range from the traditional (shotguns, grenade launchers) to more abstract such as a gun that fires saw blades, and an electricity gun.  These weapons can all be brought using experience points that killing zombies rewards you with. 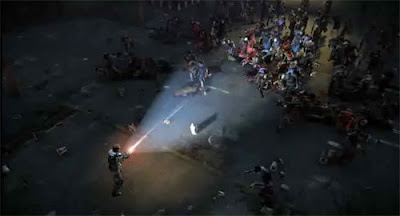 There are many many different zombies in this game, and are region specific.  Early on in the game a crashed tour bus introduces a team of zombified American footballers complete with zombie cheerleaders, this carries on throughout; by offices you will find zombie business men while taking a short cut through a fairground leads to encounters with zombie clowns.  There are three different types of zombies for the main part.  The first are the normal type who come in fat and slim varieties, next are the skinless zombies who swarm you but are quite weak.  Lastly are the Left 4 Dead style super zombies (revealed here to be government created bio-weapons designed to combat the zombies).  The super zombies include a fat exploding zombie, a tank style beast as well as acid spitters, sprinters and a monster with blades for arms.

The game is fun and with its shortish length just about avoids outstaying its welcome.  After each level your kill count is added to a world wide and countrywide total, at the time of writing Britain is in seventh place for its zombie killing ability.  A well made entertaining game that brings together the best parts of Smash TV and Left 4 Dead.

Posted by Daniel Simmonds at 02:53

Dead Nation has some huge difficulty spikes here and there. I love the upgrade system, on Xbox Live there is a similar game called Zombie Apocalypse which has more restrictive levels.