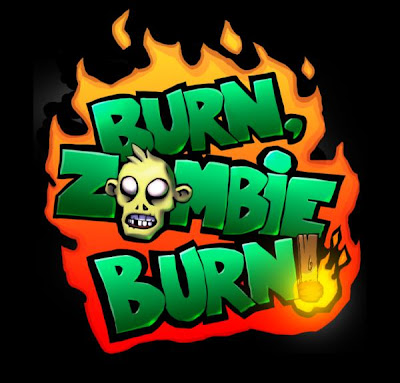 One of the reasons I wanted a PS3 was due to the amount of exclusive downloadable zombie games.  Rather than the crap of the X-Box Indie channel the PS3 exclusive zombie games are of quite a high quality. Burn, Zombie Burn! is an arena based shooter influenced by B-movies.

You play as a Bruce Campbell looking fella who has to kill legions of zombies swarming towards him in one of six different arenas.  Each arena is based on a different location such as an Army base, suburban neighbourhood, and an outdoor cinema.  Disappointingly despite the whole cartoony style, and retro themed levels there is no story whatsoever. 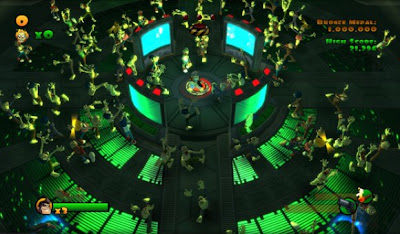 Each level sees you taking out the zombies with a variety of weapons such as Uzi's,chainsaws, shotguns and mini-gun. Taking out zombies in quick succession increases your score multiplier.  The best way to do this is to set zombies on fire. Your secondary weapon for the most part is a burning torch, touching a zombie leads to it being engulfed in flames, any zombie it comes into contact with is also set alight soon leading to hundreds of flaming, weakened enemies. Levels all include a red button that unleashes a different kind of smart bomb for each location.  The suburban level for instance sees the arrival of a UFO once the button is pressed, while the laboratory level sees a death ray appear.

The zombies are varied and attack in waves, different zombie types appear as the waves increase.  Special zombie types include exploding zombies, giant tank like zombies, American football zombies (who charge you) as well as a host of others such as ballerina zombies, and the annoying armour plated ones. 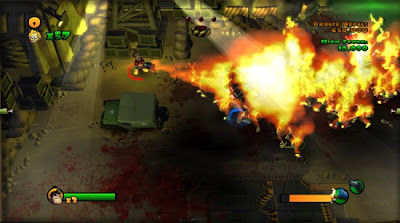 The games main flaw is that it is just so boring and monotonous.  Despite the variety of locations they all feel very similar and soon get repetitive.  There are four game modes; score attack, time attack, defence, and challenge but all are quite boring to play.  The game features a terrible tutorial mode that teaches you the games mechanics in such a slow, plodding way that I gave up halfway through as I was literally nodding off.

The game is bright and cartoony, and the Bruce Campbell lookalike has some good one liners (stolen from films) but lack of story, and lack of variety soon leads to mind numbing boredom.