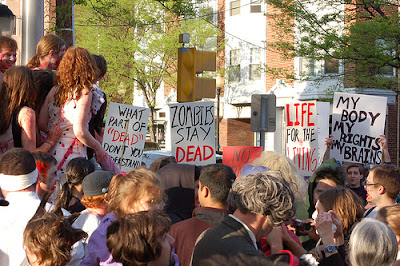 In a piece of shock news it has been reported that Leicester City Council do not have a contingency plan in event of a zombie outbreak.  A freedom of information request was made to see just how prepared our leaders are and the shocking and scandalous reply was that there is no plan.  The letter was as follows:

"Dear Leicester City Council,
Can you please let us know what provisions you have in place in the event of a zombie invasion? Having watched several films it is clear that preparation for such an event is poor and one that councils throughout the kingdom must prepare for.
Please provide any information you may have.
Yours faithfully,
Concerned Citizen"
The reply as reported by BBC news was:


"Ms Wyeth (Leicester Councils head of information governance) said she was unaware of any specific reference to a zombie attack in the council's emergency plan, however some elements of it could be applied if the situation arose."

It may seem a bit drastic to get in a panic over one councils lack of plans but it can be assumed by this news that most if not all councils throughout England have no plans whatsoever to cope with a zombie apocalypse.  It just proves that our government is useless with regards to a possible epidemic and that when the time comes we should not rely on their help.
Posted by Daniel Simmonds at 07:04