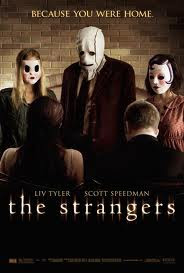 My girlfriend swears that this is the scariest film she has ever seen, while I don't agree, it is still a competent horror that is at the least well made.

The Strangers starts with a couple Kristen and James turning up at James's parents summer house after a disastrous night at his brothers wedding reception.  The atmosphere between the two is tense but events soon bring them together.  A trio of psychos have chosen them as victims in a bout of random terrorising.  Will the couple last the night? 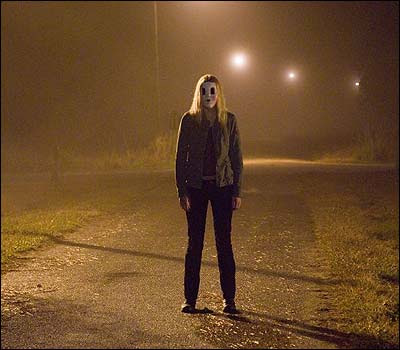 The film starts at the end with the aftermath of the films grisly events discovered by two Mormon boys.  I love direction like this though it leaves it obvious that the couple are killed by the assailants.  When I first heard about this film I didn't really have any interest in seeing it, I thought I had discovered the films twist (that the killers are teenage children) but it turns out this is very obvious due to the killers size, and due to the fact that early in the film one of them appears sans mask.

I watched the film in three different sittings, the first two sittings I was quite fearful and scared but by the time I sat down to watch the final half of the film my fear had gone and I got quite bored at slow paced sections designed to create suspense.  The film is good at creating a feeling of terror, the trio tease the poor victims by entering their house in secret and writing messages as well as move around objects which is creepy. The film works really well up until the films final quarter, I really didn't find the end section particular exciting or interesting and was disappointing compared to the thrill of the rest of the film. 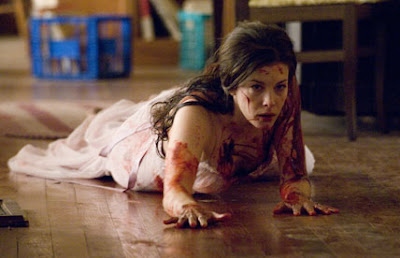 The film only really has 6 characters in it, and is set around the one remote farmhouse but it does work.  The killers speak sparsely but have dull monotonous voices which I guess are supposed to show emotionless in what they are doing but instead finds them annoying.  The plot is very very sparse though there is good build up with flash backs to the couples near break up.

A good film let down slightly by a rushed ending, and predictable horror tropes (hiding in a closet, tripping over while running away etc)) worth watching (just try to watch the film in one sitting!)

Posted by Daniel Simmonds at 06:36

Really liked this film, strikes a note that if someone really wanted to come in and torture you on a whim they pretty much could!

Can't remember it in great detail but I did enjoy it!